When I was born, I was told that my older siblings had fought over whether I would be a girl or boy, because they each had wanted me as a roommate.

But when I spent the first three years of my life living in my brothers room, my sister was more excited about the prospect of getting bunk beds than she was about having an addition to her living space. 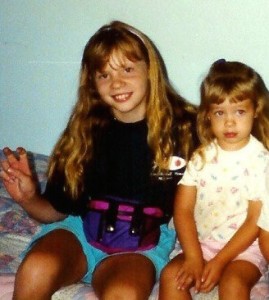 Julie and I right before I moved in.

She quickly asserted herself as the alpha dog. I mean, she already was the alpha dog of our little sibling pack, but with me coming into her room, the assertion was more aggressive. At some point in her early high school years, she’d be staying up late with homework and I remember her jumping off her top bunk with force, flipping on the main light again (after it’d only been off a minute) and saying — I need this on for homework. You have to sleep through it.

Which was fine with me. I could sleep anytime, anywhere. I played hard and long outside everyday, and I was always a sound sleeper. Before that since I was a tiny kid, she’d started to listen to audiobooks or music every night as she’d fall asleep — which I really enjoyed, and I still do often to this day. 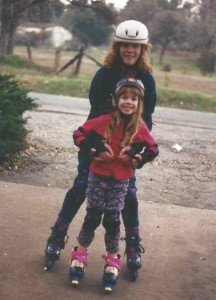 But she was always grumpy about these things. I think she just felt that I was there, impeding her style, and she’d get frustrated by the fact that she she felt like I would mind the things she wanted to do. Which actually, I didn’t mind, because I was easy-going, and she was my idol. If she wanted to keep the light on until 2AM, that was probably the coolest way I could think of to go to sleep.

She often had migraines, as well, she developed a serious health condition which rendered her bedridden for much of the day for the better part of a few months. As I was still a homeschooled child at that point, that made my room off limits to me for the daytimes.

I’d have one of my best friends over and we’d be playing, and we’d need something from my room. We’d traps down the hall like normal, but right as we’d get to the door, I’d say, “Ok, be quiet, because Julie’s in there,” which they knew meant that she was in there home sick with either a migraine or a desperate need to sleep, or both. I’d see a look of panic and terror wash over their face as I’d say, “No, it’s fine, just don’t say anything.”

I’d open the door as quietly as possible, but that door always creaked, and we’d tip toe in. When the light from the hallway would wash over the top bunk we’d inevitable hear a groan and she’d turn over — a bear adjusting her sleeping position during hibernation. Once in a blue moon she’d yell at us to get out. At the moan or the yell, my friend would scamper out into the hallway, but I’d stand my ground. She was like a sleeping bear.  But I shared the den. I wasn’t afraid. Maybe I wasn’t wanted there. But I wasn’t afraid. And I knew my rights.

I’d find whatever I was looking for in the dark room with my keen night-vision, and then I would tip toe back out, and again, as quietly as possible, shut the door.

But amid the tip-toeing in the dark, amid the going to sleep in the light, amid the endless “My room is clean mom, that’s all Joanna’s stuff.” tattling that was absolutely not true. Amid all of that, in the quiet moments here and there when no one else could see, she’d share things with me. She’d let her guard down. She’d let me into her world for a brief moment. And sometimes, for a long moment.

I was a midnight confidant. I remember when I was five, I was asleep on my bottom bunk, and she’d just turned off the light and hopped to the top bunk. With her shaking the bed as she climbed up I woke up, and told her goodnight.

What followed was a 20 questions type deal where she eventually revealed to me who she had a crush on, which at the time, was the ultimate sacred secret to keep for any middle school girl.

“Don’t. Tell. Anyone. Or I’ll kill you,” she threatened when I’d finally guessed.

I wasn’t scared of her. “I won’t,” I said truthfully. She didn’t have to scare me into knowing how valuable of a secret she’d shared. I was the most special 5 year old I knew in that moment. I had a cool older sister, who told me secrets that mattered to her. I wouldn’t blow it. I promised I wouldn’t tell anyone.

And even though it was dark, and she was laying in her bed on the top bunk out of sight, I’m sure she was smiling.

To this day, I have a tendency to gravitate toward the hard-exteriored, grumpy people of the world. Maybe I don’t gravitate toward them, I just don’t run away as everyone else does. Because my time living with Julie taught me many things, but mostly, it taught me that grumpy people aren’t necessarily mean people. And if you stay secure in yourself and your rights, if you aren’t afraid and you don’t run away, you just stick around, eventually, they may just let you in. Probably just in small moments at first. But dams cave with fewer cracks in them than you’d think. 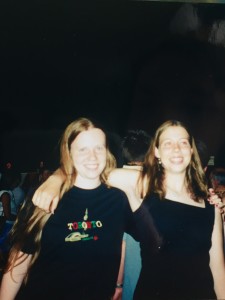 By the time right before my sister got married, she admitted that she missed living with me, and that she considered me a friend. I count that as a personal win.