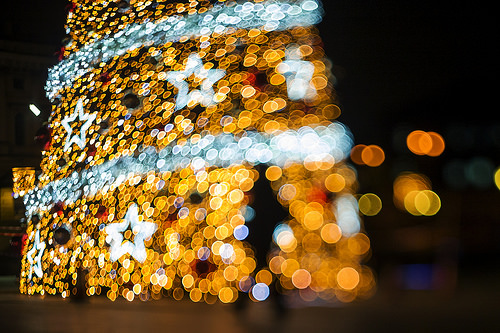 I remember being in college, and learning that one of my old junior high students from the youth group I helped with had had his mother die. On Christmas day. Their dad was already out of the picture and life was already hard.

For a story I wrote earlier this year (which will be published at a later date), I sat in an interview with a man who told me his mom and his dad sat them down to tell him and his brother that his mother was having an affair with their friend’s dad. It was Christmas day when they told the boys this. “We took the tree down after that,” he said. “Christmas was over.”

Just this past week, a guy I know from my hometown had his dad unexpectedly pass away. And the week before that a gal I went to school with had her little four-month-old baby die in his sleep.

But here comes Christmas and while no one means it in a confrontational way, the messages all around us tell us that everything is, or should be “merry and bright.”

Ideally, our families would all get along and our Christmas days would be Merry and Bright — our tree would shine with the hundreds of starry lights, and our front lawns would be covered in snow, and our bellies would be full from good food and would laugh heartily, merrily, if you will, from all the joy of the day and the good news that Jesus is born and Santa came.

But sometimes Christmas — like many other days that have no name aside from “monday” or “today” — is a hard day to get through. Sometimes the whole Holiday Season is hard to get through. When everyone is bustling around looking joyful in their instagram pictures and you are hurting and aching inside and you feel like you just want to hide under a rock until January when it’s finally acceptable to be “hard and dull” again.

Sometimes, our worlds are quite dark despite — sometimes because of — Christmas time.

But this is what I know. Christmas is a symbol of light in darkness. The bright does not have to be merry, it is simply hopeful. It doesn’t even mean that things are going to be fixed now, better now — it just means that there is hope of brighter days ahead.

Whether you are religious or not, or whether you believe in God or not — that’s what Christmas is meant to be — that’s what Christmas is to me — a hopeful light in the dark sky that says, “You are real, your hard-life crap is real, and while it’s maybe really dark right now, and it feels like you’re alone, that everyone has forgotten you, that you just cannot catch a break, there is hope. Maybe not tomorrow, maybe not the next day, or even the day after that, but this pain, this sadness, this aloneness gets better. There will be better days ahead. Please, know that you’re not alone. Please, know that there is hope.”

The story goes that 2,000-some-odd years ago, actually not in December, not with snow, or trees, or any brightness or merryness, a young girl completely shamed by a sex scandal, pregnant, married to a man who thought she was a liar for a time, and on the road for a last minute tax census started to go into labor. They couldn’t find a place to stay. They tried and tried, and could not catch a break. Until finally one generous (read: I think he was probably an asshole trying to do his minimum standard “good deed” for the year. Who doesn’t give up their bed to a pregnant lady in labor??) inn keeper says, “Alright fine. you can stay in the barn. Don’t mess with the animals.”

And she has a baby. Away from home. Young. Afraid (I’m certain, because who, when giving birth for the first time isn’t). Practically alone. Her mom isn’t there. The women of her village who she always had thought would be there when it came time weren’t there. And she probably had the sadness to realize that even if she was home they might not have been there, because, again, she was shamed by what everyone considered a sex scandal.

And yet there, there was this little baby. His formal name was Jesus. But they called him “Immanuel,” which means “God with us.”

That’s what Christmas is about. If you believe the story, know that it’s about God being with us. If you don’t believe in God, know that it’s about the fact that still, you are not alone. That there is hope. Hope, even in the midst of dark, dark, nights where you can’t catch a freaking break.

For those whose Christmas times are feeling Merry and Bright — please try to reach out, spread that brightness to those in the dark nights.

For you for whom Christmas is a hard time, I believe that God is with you. My prayer is that you will feel that to be true, even when it feels hard and dull.