Things I love about Wichita

A few of you know that I’ve been in the process of house-hunting, and while technically I think something could still fall through, it looks as though I will be closing on a house here in Wichita soon.

As I’ve told a few friends this as we’ve been catching up recently, their response has all been a rendition of “Wow, you must really love it there, then.”

Which I do.  I think for many people who don’t know me quite as well, or don’t really know what Kansas or Wichita are like — the thought that crossed their minds as I moved here is that I would enjoy it and then move on, as I have a tendency to do.

And maybe I will someday. But I moved here with the desire to find a new hometown, and with an inkling that this is what Wichita would be to me.

I have commitment issues in life, that’s no secret. I remember the knot in my stomach as I signed a 10 month lease in an apartment in California. “10 months?? Who knows if I’ll still want to be here in 10 months!” was the thought that crossed my mind.

But, while my spirit is still a wanderer, and I still want to travel and roam the world, my spirit likes roots. It’s like a wave that likes a shore to come back to. That’s what home has always been to me. The place for roots, the place to come back to for real life. And that’s what Wichita feels like to me. The first day I ever spent here was two and a half years ago, and I had the distinct, surprising thought: “This feels like a hometown.”

It still does. So I have no anxiety or qualms, no question of “Who knows where I’ll want to be in 10 months.”  I want to be here. And that is an amazing feeling of peace and place that I’ve been lucky enough to find again.

With that, I’ve made a list of things I love about Wichita: 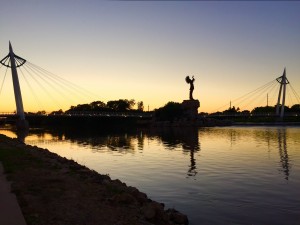 Dear Wichita, it’s earlier than I would usually feel this or say this to anyone, but, I love you.