He was the first one to buy my work.

Two years ago, I started to make art pieces. It happen kind of overnight. I got the idea for one piece — an Audrey Hepburn portrait on book pages — made it, and then I just kept creating. Two weeks later I’d already made 10 fine art pieces, and then one saturday morning, when I was thinking about Saturday morning cartoons, I decided to replicate a Calvin and Hobbes sketch I’d seen recently.

It says “True friends are hard to come by,” and after I posted a picture of it on instagram, two of my close friends asked me to make them copies as well. And then this guy that I didn’t know, Kevin, messaged me. He’d seen the instagram post because of the #CalvinAndHobbes hash tag I’d used. He wanted me to make him a copy of the art piece as well.

More accurately — he wanted to buy a copy. This was the first time I ever realized that maybe my art was good enough that people might want to buy it. Maybe I was an artist.

I made the piece for him and it was my first art sale. He posted a picture of it on instagram when it arrived, and tagged me in it. I was officially an artist, and he was so excited to get the piece to decorate his home. “Thanks,” he wrote, “and congrats on being a great artist.” I have been selling my art ever since this encouraging interaction. Kevin helped me see myself as an artist and embrace it.

Two years went by, and one day recently, I got an email from a woman out of the blue.

“You are the one who made the attached drawing for my brother, Kevin (I’m assuming since he tagged you in it). I’m not sure if you knew him as a friend, too. If you did, then you probably already know that he passed away in February 2014.

Your photo was one of his last posts, he was really excited to get it.

He died a couple weeks after he received the artwork. He was 30.

This news hit me like a slap in the face. I had referred to Kevin as “some guy in Boston” semi-frequently when people ask me about my art work. I tell them that he sought me out and that that sale helped me realize that I really could do the artist thing. He was a significant part of my story without fully knowing it, and because of the time of his death, I was a part of his story, too.

It is a reminder to me that you never know how your interactions with someone could be parts of their story, and could even be some of the last interactions that they have.

Thank you, Kevin, for being a part of mine. Rest in Peace. 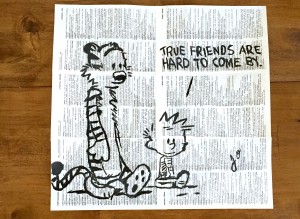