Put On Your Shoes: An ode to my protective big brother 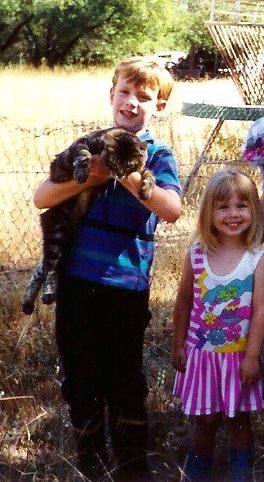 He must’ve been about 6 years old. His head full of blondish brown curls. He was tall, lanky, apparently even the “slim fit” pants would fall down because of his narrow width.

I was a toddler, about three years old, with baby-fat chubby cheeks, big blue eyes, and blond hair bleached blonder by hours spent outside in the sun. I wore solid colored shorts with elastic bands (as is common for toddlers), and I’d always pull them down to the lowest point possible on my hips. (I don’t know if you knew this, but I liked hip huggers before they were cool. I was pretty hipster.) And I was a hard-core 3-year-old subscriber to the idea that barefoot is best.

Usually though, when I was doing things like riding a bike (with training wheels, because hey, I was a toddler and this is a true story) or a scooter, or rough and tumble things like that, I was required to wear my shoes.

And the same was true for the swings.

My brother Jason and I had this game where we would swing, and instead of just jumping off the swings like children of average talent, we came up with a more elite, challenging twist: One of us would jump off the swing and just as they jumped, the other would yell something that the jumper had to act out before landing.

Example: Jason jumps. I yell, “The Sun!” Jason puts his hands up to his face jazz hand style to display the sun mid-jump, then he lands. Somehow many of the shapes/things we acted out involved a very similar display of flaying arms and legs out to our sides and/or jazz hands. OK, maybe we weren’t above average ability like we thought, but our denial was strong.

One day Jason and I were out swinging barefooted in the afternoon sun, and I suddenly jumped off the swing. “Joanna!” he yelled. Which was weird, because I didn’t have to change my shape at all because I already was a Joanna before I landed.

“What?” I asked once I landed my jump with olympic precision. “Why’d you just say my name?”

“You know you’re not supposed to jump off the swings or out of the trees without shoes on,” he said.

“We can play the game, but you have to go inside and put shoes on first.”

So I went inside and put on my saltwater sandals, knowing that option wasn’t up to par, but thinking I’d try it anyway.

“Little girl, those aren’t shoes,” he responded, giving me that sideways glance that big brothers can give, even when they’re skinny bean poles with floppy blond curls.

“But, these still protect my feet,” I retorted.

“Fine, next time you have to wear shoes, though,” he relented.

“Yes! Ok, you jump first!” I said, full of glee at my triumph. I hopped on the swing, and pumped my legs as hard as I could to get up to speed with him.

“Flower!” I yelled as he jumped, and he kept his legs straight like a stem, put his arms out wide with splayed jazz-hand fingers for leaves, and made his face cheery like a flower while he landed.

I’ve always remembered this instance, because it’s the perfect summation of who my big brother has always been to me.

But while he is there to be a voice of reason, a voice of caution, the most important part is the stableness in the fact that he is there.

In the aftermath of my life falling apart, I had one afternoon where I was sitting in my car, up on a hill overlooking the town and the railroad tracks. And it was the only time I have ever legitimately had both the desire and the will to run away. I saw the train coming in at a slow chug, and I thought, “This is it. Just leave your phone, your keys, your purse, everything. Just jump on that train and make a new life from scratch.” I used all of my willpower to force myself to stay in that car until the train passed, because I knew if I opened the door, it would happen. I would run.

As I told my brother and parents about this day about a year later, Jason came to me and hugged me, and said, “I’m glad you didn’t get on the train. I would’ve had to go and search and find you to make sure you were alright.” He said it with a veil of joking in his voice, but his message was real.

Note that he didn’t say he’d have to go find me and bring me home. He said he’d find me to make sure I was alright.

Jason has never tried to dissuade me from one of my various adventures or antics, but he occasionally does voice the helpful thoughts like, “You can jump off the swing, but you should wear your shoes.”

His protection is always selfless. And that’s a trait I have yet to find in anyone else in the world.

I know it’s not easy to watch people you love go off and traipse around the world, and have adventures that will probably turn into crazy stories, but that also have to potential to go wrong.

I know it’s not easy to be the big brother to the fearless three-year-old who will jump from the highest branch, or the galavanting 25-year-old who blows about with the wind. But he does it. Consistently. And he does it well. He has mastered the art of being a loving, protective big brother, while also letting me fly free and being happy for me as I go.

And while I live in different cities and states (and sometimes countries) from him, I still value the times we do get to do life together. Because he was my first best friend, and he’ll be one of my best friends until the end. And there’s something extremely valuable about someone who both tells you to put shoes on, and then jumps off the swings with you. Someone who would track you down when you ran away, not to drag you home, but to make sure you were OK. Someone who loves you like he does.

Happy birthday week to my dear big brother who I squabble with in love, talk to as a friend, and who takes up much more than his share of the couch when we’re watching a movie together as a family. There’s no one quite like you. I love you, Jas. 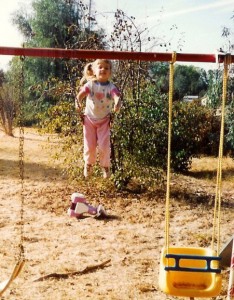