Post office friends — on meeting people, being new in town, and being open.

I was at the post office. It was 4:40 and I needed to mail a stack of about 7 envelopes all registered mail (meaning, apparently, that I have to fill out a form for each of the already-addressed envelopes with to-from info as well as estimated value included inside, and then they have to be specially sealed, then stamped all around that seal, then addressed again and sealed with an additional sticker of authenticity, and then weighed and posted). I’m tired just writing that.

So I filled out my portion of the form for each of my 7 envelopes hurriedly while I was in line, letting several people go in front of me. By the time I reached the counter it was about 4:50, 10 minutes until the closing. A tall, thin man in his 50s or 60s waived me up to his empty station at the far end of the counter. His name tag told me his name was Ike.

I came up and told him, apologetically, that I needed these 7 envelopes sent by registered mail and the rest sent regular post. He turned and walked away without saying anything. I wasn’t sure if he was getting something or heard me or just decided that enough was enough and it was close enough to closing.

I hung in the balance for a good 45 seconds, not knowing, until he turned around the corner with a roll of brown sealing paper in his hand. As he re-joined me at the counter, he set to work slowly, but not dawdling, just taking his precise time, still not saying anything. His face was kind, though, so I started: “How’s your day been today?”

“It was pretty good, then you showed up,” he said dryly, looking up at me with a glint of humor in his brown eyes. A beat. Then he smirked, softly. 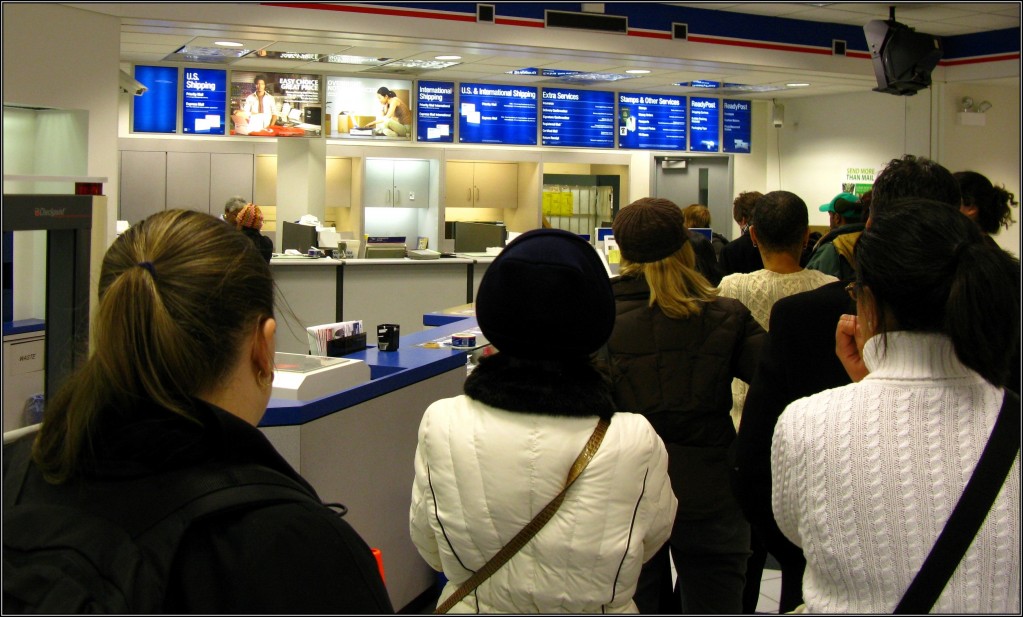 We began chatting, slowly at first, with long pauses between conversation topics. But the process to complete my request was long and I was with him for literally 30 minutes, and we chatted about his work, his life, where he’s lived, that I just moved to Colorado…

“When did you move?” he asked, still looking down, busy with his work.

“Last week,” I said, a little too peppy.

He paused. Looked up. “Last week!?” he exclaimed drawing out the emphasis like Bill Cosby would when talking to his kids.

“Man. Well, I think you’ll like it. It grew on me, but it’s home now. I think that you’ll find that people are kind here. And if you meet the few who have bad attitudes, just tell them to go smoke a bowl and chill out,” he sat flatly, then looking up at me with that same sly glimmer, he let his full grin slip and laughed.

“Just offer them some cheetos to compliment their necessary high?” I joked. He laughed and then coughed from laughing.

We parted ways and I told him my name and told him he may see more of me as I seem to mail things often these days. “I’ll run the other way next time,” he said, winking. And then he silently waived the next person in the still very long line up to his desk as I walked away, 20 minutes after closing time.

He’s been at his job with the USPS for 30 years now, and been in this particular post office for 20 years. Never had a mail route: “Heck no. I like to be indoors with the controlled temperatures. If I’d have had a mail route, I’d have made a liar out of their ‘through sleet hail and snow’ motto real fast.” And he was not just patient, but pleasant as I came in with my lengthy request at almost closing time.

“Sorry again that you had to do this,” I said. “I promise next time it’d just be a simple “Hey Ike, can ya ship this for me,” request.”

“Nah, nah, it’s alright Jo. It was mighty fine closing out the day getting to stand around and chat with you. Have a good one.”

I may have moved to a pretty big city, but so far, I feel like the connections I’m making are these small-town type connections. Getting to know my post office employees and the workers at my local Costco. I’ve become well acquainted with my maintenance guy now — he’s been to my apartment to fix and re-fix issues with the gas in my fireplace about 5 times now over the past week.

I went to church last night and was fortunate enough to have a friend let the pastor know I’d be coming, so I got to go to dinner afterward with the pastor, his wife, and several others from the church. And I found myself telling my story, and crying in a restaurant as I am so familiar with doing now in public places when I get real and share my past pain.

And I’ve been to two family dinners — one with a cousin of mine and one with my friend Kate’s Aunt and Uncle who live here.  And I spent part of an afternoon giving a ride to Kate’s little sister who goes to college here now and doesn’t have a car.

Like I said, I may have moved to a big city, but these connections don’t feel like it. In a week I have had more honest and real interactions with people than I had in probably the first several months of my time in my previous town. Which doesn’t say as much about Denver versus Rocklin as it does about me now versus me a year ago.

I am opening up again. I’m coming alive again and being vulnerable again and it’s opening up some beautiful doors of connection. Even at the post office at closing time.