North State Voices: When I gave up, someone gave me help

North State Voices: When I gave up, someone gave me help 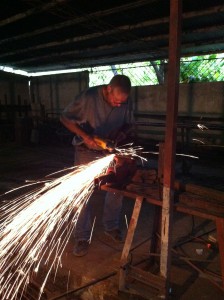 Throughout our church team’s 10-day journey in Haiti, this became Rodney’s catchphrase. We were traveling in an open-top cargo truck through rugged “roadways” on the Haitian island of La Gonave. The dirt trails were rough enough to give the Indiana Jones ride at Disneyland a run for its money.

The way was lined with trees with thick, low-hanging boughs. We were sitting atop all of our cargo, putting us in the direct line of fire to be hit, or knocked right over, by these limbs. Rodney became a necessity for our team, as he perched himself up and loudly warned when branches were coming.

Many of us started the trip emotionally and physically drained. Because of an unexpected medical trauma of a dear friend, the week prior to our trip had been spent in uncertainty and prayer, not knowing if she would live.

Little sleep and emotional exhaustion had landed me a bad head and chest cold before we even left. Then we started our trip on a red-eye flight.

The entire journey was long and arduous. On the way there we were focused and excited for our upcoming interaction with the community. So when Rodney yelled “Branches!” it felt like an adventure.

Our journey on the way back was a different story for me, though. Because a rainstorm had rolled through the area and made the roads nearly impassable, we left with 20 minutes’ notice. We were told at 11:30 p.m. that the truck had arrived (hours later than expected) and that we needed to go then while the rain had stalled or we may not be able to leave for days.

After a week of stress, sickness, emotional turmoil and having worked from dawn until late every night doing physical labor, tears of exhaustion rolled down my cheek when the men yelled to us that we needed to pack up and go right away. I didn’t think I could make it.
We drove through the dark night in the same truck. The roads were slick with mud, which made for more jolting and sliding, sometimes nearing the steep edges of the hills.

The night was a blur of jostling, breaking down, falling down and then eventually, my energy evaporated, and I just gave up.

At that point, I was sitting atop an overturned five-gallon bucket, and leaning my weight against a stack of buckets next to me. I was in a constant daze-state, falling asleep in the 15 to 30 seconds between every bump.

Rodney, the only one with real energy left, was standing at my side, holding on to the exoskeleton-frame of the truck and looking forward into the dark, still yelling his warnings.

And then a thick, solid arm of a tree seemed to pick me specifically, and in my unaware daze, I felt a “crack!” across my head as I was knocked off the bucket.

I eventually climbed back up, hardly sure of what had happened. For the rest of the ride, though, I slowly realized that with every call of “Branches!” someone was throwing their body over mine, protecting me.

It wasn’t until a few days later that I realized it was Rodney who had shielded me. When I thanked him, he simply said he saw me get hit by that last branch and felt so bad that he just did what he had to after that.

I was the most exhausted and weak I’ve ever been, and he stepped in to protect me at his own expense.

I’ve had a few experiences like this — where I was too weak, too broken, too confused, too wounded, too tired to help myself — and someone like Rodney stepped in to help me when I was too weak to even know what I needed.

I am deeply touched by these people. Their short-term actions have left long-term gratefulness in my heart. They have inspired me and shown me that sometimes people aren’t able to ask for the help they need, and hope comes when we offer that help anyway.

I know it won’t always be comfortable, but then again, neither is getting hit by branches.