It was Friday afternoon in October and my friend Stephanie and I were shopping in the Salvation Army, looking for fun and funky outfits.

As it goes in second-hand shopping, our options were slim. But, two wedding dresses caught our eye.

I picked the more modern, princess-style one, and Stephanie picked up the Laura-Ingalls-got-married-in-this-exact-dress-on-the-prairie one, just for kicks and giggles.

There wasn’t a dressing room. There were, however, a few full-length mirrors for sale in the back of the store. So, we proceeded to do something that should be embarrassing, but because it was in Oroville, wasn’t even given a judgmental glance: We began trying on dresses over our clothes for all to see.

We were having fun trying on the ridiculous get-ups, and laughing at each new choice. People ignored us until it came to trying on my full-skirted, strapless bridal gown with a hot-pink corset.

“Oh my gooooodness.” A woman at the costume rack 15 feet away was gawking at me. “That looks so amazing on you!” she said boldly.

“Me? Oh, um. Yeah, thanks,” I offered kindly, a little taken aback.

“Are you getting married? You must be. Oh, you need to get that dress, you’re so pretty in it, isn’t she pretty in it?” she asked, bringing her under-20-year-old son into the conversation.

“You do look very pretty in that dress,” he said, tipping his cowboy hat up so I could see his face.

“Thank you,” I said again, trying to be polite and curt. Apparently the curtness didn’t translate.

“So you are getting married?” the woman persisted.

Now, I don’t commonly lie except to strange men in foreign lands — to them I always have a large boyfriend who is meeting me at any moment. But for this woman, my split-second decision to try to end the conversation and continue the day with my friend led to the following lie slipping out: “Yeah,” I said, vaguely.

Not so polite. Curt.

“Oh! When are you getting married?” Her excitement had gone up four notches.

“Dangit,” my mind said. “Probably next year,” my mouth said.

And then, it seemed the curtness worked, and she mumbled some sort of “That’s nice,” as she turned back to the costume rack. Stephanie and I continued our shopping, giving up on the dresses. But then, with no warning, the woman was by my side again.

“Are you engaged?” she asked, putting her face almost down to my waist level to get a good look at my hand before I could hide it.

Her son sauntered by us again, lingering awkwardly.

Finally he offered, “I really do fancy that dress.”

“Thank you,” I said, still genuinely, still curtly. Again, Stephanie and I went on with our trip.

Before we made it to the checkout line, the woman approached us once more. Before she even spoke, my desire to be honest or kind were battling it out.

“Just real quick before you go,” she begins, “so, you do have a boyfriend then?”

“Oh, darn,” she breathed dejectedly, yet still fishing, “because my son over there, he really thinks you’re pretty.”

It was one of those moments where I felt like this white lie was more polite than the true, “There’s no way I’m going out with a boy whose mother asked me out after they saw me in a wedding dress in a thrift store, and I lied to them saying I was taken, but thanks anyway.”

As we left though, I decided maybe being honest and semi-rude from the start was better than being dishonest and semi-polite. That’s why when I ran into the same mother-son duo at Walmart three days later, I looked him in the eye and blatantly turned around and walked away.

It just goes to show I’ve got some more living and learning to do. 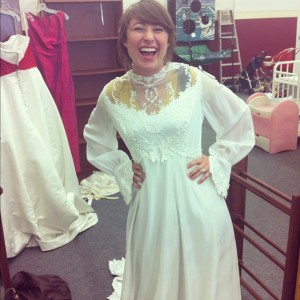 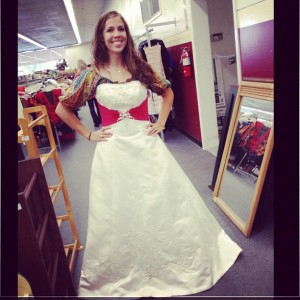