North State Voices: A grandmother’s legacy of love and life

North State Voices: A grandmother’s legacy of love and life
by Joanna O’Hanlon

She didn’t want my sister’s grave to be alone.

She was nearing death — she had been nearing it for over a decade — and yet as she was thinking about her final resting place, she was thinking not of herself, but of her late granddaughter.

Because that’s who she was: My grandmother, Evelyn, was a woman who loved people, and loved life. She was feisty and gentle, and somehow, in her, they were not separate like oil and water, but blended like a smooth peach sorbet — both sweet and tart in the same bite.

In the story of her life, her plot-turns read like tragedy, but she breathed vitality. She was born into the Depression, the youngest child in her family. She was young when her brothers went to war. She saw the death of her son, siblings, granddaughter and husband. And ever since I was young, I’d been told “Grandma’s dying.”

She’d had serious health problems: illnesses, surgeries, on and off of oxygen tanks for her emphysema. It’s as if death had been trying to take her, and she kept saying “No.”

With her stubbornness against death, she chose to love life.

I remember shopping with her for hours, until her strength would give out. She loved a good sale and cute clothes.

I remember watching TV with her — her brushing my long hair, working gently through my tangles.

I remember going through the misty gardens on the Oregon Coast with her. We pushed her through in her wheelchair, but she loved to take her time to literally smell the roses and take in the beauty.

I remember when I was a little girl, when everyone in my family would give me a hard time for having to stop for “potty breaks” often on the nine-hour ride to her house, she’d just say to me, “It’s OK, Sweetie. You drink a lot, you go a lot.”

I remember eating dessert at her house — this woman is where I inherited my sweet teeth (because all my teeth are sweet). We’d have raspberry ice cream, peach ice cream, cobblers, cakes and candies. She’d say “just serve me a little bit” by which she meant a portion three times larger than normal people would have. Sometimes when life is sour, food is better sweet.

But in the end, her body was exhausted. She was still fighting to live, but it was clear, with the pain she was in, her body just couldn’t do it anymore. She’d had several close calls over the previous months but when we gave her our blessing, she decided that it was time. She took her last breath not even 24 hours later. Even Death seemed to have to take her on her terms.

It’s been a few years since she passed away now, and we finally scattered her ashes this past month. After being reassured that my sister’s grave would not be alone, she decided that she’d like her ashes to be scattered together with my grandfather’s.

“But I don’t want you to dump mine and then dump his,” she frankly told my mom. Her solution: She instructed my mom to put both her and my Grandpa Buzz’s ashes into a brown grocery bag, shake them up, and then scatter them. She wanted to truly be with him forever. And she was unashamed of the means of getting there.

When our family was together on the boat, after we’d laughed at her somewhat bossy and unconventional instructions, we said our goodbyes, each dropping a flower onto the water of the gray San Francisco Bay. The rain had subsided to a drizzle, and each of us with our wet jackets and wet eyes went for a round of hugs.

My mom, after their hug, looked down at my cousin’s pregnant belly and said through tears and rain that somewhere in storage was a blanket that Grandma had instructed my mom to give to the first great-grandchild.

She died in 2008, and she’s still taking care of the people she loves.

That was my grandma. With a life of heartbreak, a family with life-aches, her legacy is resilience. Life weighed its heavy hand on her, so she held it and walked on. 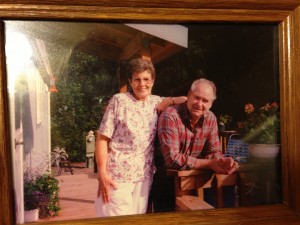