This past weekend I experienced my first real culture shock.  This whole time I’ve been submersed in a place that is still the same as the US in many ways especially because it’s all western culture, and where there are some differences, for the most part, they all seem like differences that you would find SOME place in the US.

Sunday was different.  Sunday was my village’s celebration of Fasnacht.  Fasnacht is a thing which German’s celebrate starting in November, and it moves from village to village throughout the country.  So each village/town/city celebrates at a different time.  It’s always a time of festivities and such,  including, usually a good amount of alcohol, and a parade of sorts and maybe some parties… but it’s usually on a more moderate scale.  Also, each village/town/city has a Fasnacht troop which dresses up in matching costumes for that one village.  These troops usually travel to different neighboring towns and villages for their fasnacht celebrations also, so each city has a few troops there to celebrate.  Also, many people in the town dress up in the few days before fasnacht (this part of the festivities is similar to our Halloween.  People dress up as anything and go to costume parties and stuff).  Then, on the day of the parade (on sundays) everyone from the town comes out to watch.

Now, my village (Busingen), is one of the last places to celebrate Fasnacht (or maybe it’s the very last place, i’m not sure) so people and troops come from ALL over Germany to our little village to celebrate, so the festivities here are unique, huge, and out of control, which is different from the normal Fasnacht celebrations I guess.  Normally a village of about 200 people (so i was told) was filled with over 30,000 people this weekend (again… secondhand rough est.).  but still… crazy.  So there’s all these crazy drunk people here, many of them who have been drinking for days straight, and then there’s all these different troops here to be in the parade and they’re all in their village’s costumes.  (There were 103 troops).

Besides the madness that this would include… all of the costumes are really evil looking and demonic for the most part.  The majority of the costumes were those of creepy witches and demons.  literally.  it was really disturbing.  Not only were the costumes disturbing (and the sheer number of these demonic costumes…), but the drunk people beneath the costumes were acting crazy and evil and they were operating without any inhibitions.  So… this is where things went drastically different than in the US.  All these people were in a parade which lasted almost 4 hours, and the rules here are different.

Coming from the USA… there’s certain rules that we just take for granted that everyone will operate by: one of them concerns how we will or will not be touched by strangers.  For example, if an American is ever going through a haunted house… you may be bombarded with scary images and people dressed up in frightening costumes and doing things to scare you, but you go through KNOWING that no one is allowed to touch you.  I personally would operate not only under that assumption, but under the assumption that if someone were to touch me, I’d have ever right to sock them in the face or something to defend myself.

Here… it’s quite different. Nothing will serve as an accurate description for you to know exactly how it was, but I’ll try to help you envision this:

At this parade, the costumed figures would come toward people in the crowd and do various things… they would come up to young girls and rub their hair… or they would come and rub tons of confetti in their hair and/or shove it down their shirts and pants.  They might come and zip-tie someone’s legs together and then pick them up, sling them over their shoulders, and carry them down the street.  they might come grab a girl, and then have one of the costumed men on the ground, throw the girl on top of him, and then another costumed one would jump on top… and then in this costume demon sandwich they would move suggetsively all over.  One time we even saw them do this to a young girl who couldn’t have been more than 8 or 9 years old.  Some girls were targeted multiple times for such things because they looked like easy targets.  We saw one girl have things done to her more than 8 times… and her boyfriend stood by everytime and laughed.  This is just what happens, and eveyrone knows.. and most even enjoy it. 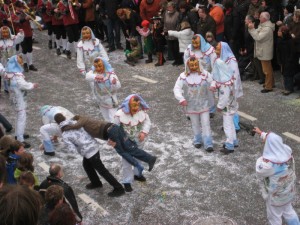 someone getting taken (they also took his shoe) 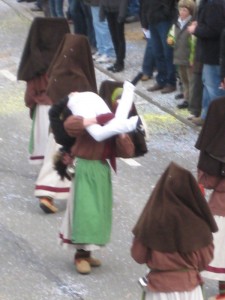 a girl they took

Like I said…. CULTURE SHOCK.  Also… if the demons or witches came toward you (this happened to me when I was on the street, trying to move down the street to my friend’s house where we were going to watch the parade safely from her balcony), and you looked scared, then they would chase you.  So… here I am on the street, having been watching the parade for only like 5 minutes when we see these really creepy/evil/scary looking demons coming down the street getting closer to us.  We started to feel uncomfortable.  Then they saw us in the crowd…. somehow the fact that they saw us made it more intimidating, so we slowly turned away, and started walking semi-briskly down the street on the other side of the crowd, separated from the street…. and immediately they took off running after us!  I tried to get farther down the street and then jumped into the middle of the crowd so they didnt see me.  After that we decided to watch from the second story of our building. 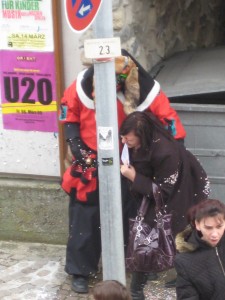 they chased her behind the crowd 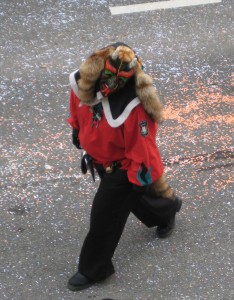 Everyone from this culture seems to love this event… especially the people from this village because it’s definitely the biggest thing that ever happens here.  Yet, the whole thing was so different, and so disturbing to me.  Later on in the parade I did finally make it to Beth’s house to watch from her balcony, and on that area of the street there were more families so the costumed people were much more civil… and that was more enjoyable to watch.  But still the whole thing was disturbing and very oppresive.  It stressed me out a lot even to just watch what they did to a lot of the people on the street that by the time it was over i was absolutely exhausted. 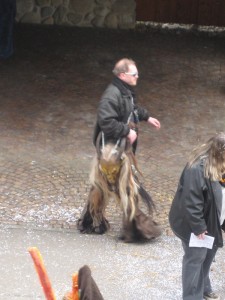 after the parade they 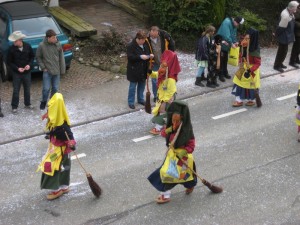 I didn’t take a lot of pictures because i simply didn’t want to remember a ton of it or to save a lot of it because it felt so evil at times.  But i did take some to try and show you guys the essence of the day.  The whole point of Fasnacht I was told is that it’s to scare away the evil spirits of the winter and to welcome spring here.  The whole thing is like a big combination of carnival/mardi gras, halloween, and april fool’s day.  Still…. it’s not exactly my cup of tea.  It was however, a very good reminder that I am definitely not in the united states anymore. 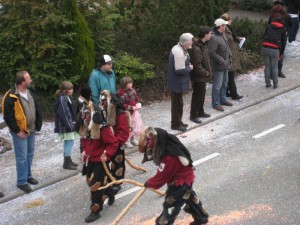 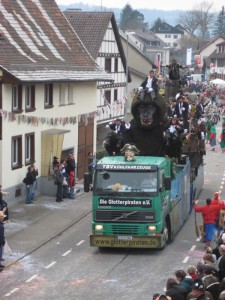 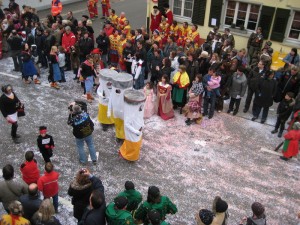 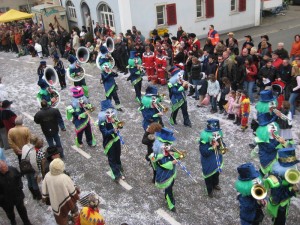