Let’s Do It | Roommate Series #5 Emily 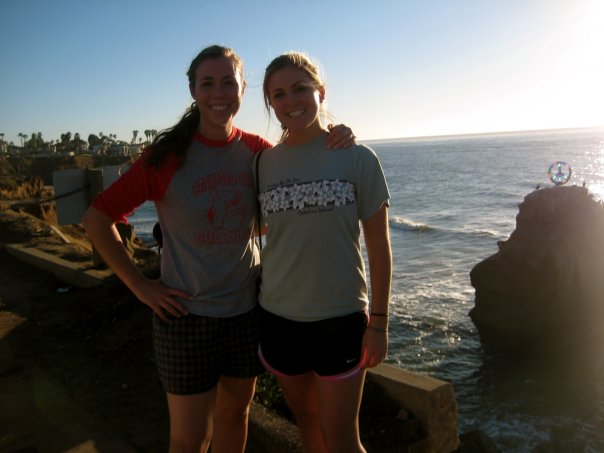 Emily and I on a run to Ocean Beach

Emily was a part of our little crew of four at the end of our freshman hall from the start. The whole first week we hung out when we weren’t in class. The whole hall did. We’d wander into each other’s rooms and talk about grand plans, and about where we were from, and what we liked to do.

Somewhere in the first few days someone started talking about getting piercings. I’d wanted the cartilage of my ear pierced for a long time, but had never been allowed to before. I’d wanted to since I’d turned 18 two weeks before, and was just looking for a time. Lots of the girls on the hall started to voice similar desires.

“Let’s go do it this next weekend then!” someone suggested. We all said that’d be great.

We went to one mall searching for a place to get our ears pierced, but after searching high and low there, there were no piercing options.

I called my brother and asked him to google if there were any at another mall nearby. He said there were, and he gave me directions over the phone to get there. The freshman shuttle didn’t go to that mall though, so we had to walk a few miles.

So we continued our hunt. When we finally made it to that mall, we walked around the whole mall only to find that they also didn’t have a place to get our ears pierced. Defeated and tired, we started our trek back to the original mall a few miles away, and dejectedly took the shuttle back to campus.

“At least we tried,” we said to each other.

By the time we got back to campus, we’d been gone nearly the whole saturday on our unfulfilled quest.

We barely made it back in time for dinner at the caf, and when we got there we saw some of our hall mates. We told them our tale when they asked if we’d gotten our ears pierced.

“We think we just need to find a tattoo parlor and get it done there. I guess we’ll just have to get a ride a different day,” we said, accepting the day as still a success of effort at least.

One of them at the table was a sophomore with a car who’d been working that whole day and had just gotten off. “Do you still want to try to do it today? I could drive you.”

“Really?” we asked, semi-tired. “But do you know of a tattoo parlor that’s open that would do it?”

“Yeah, I think so! We could at least go and see,” she offered.

“OK,” Emily and I said, looking at each other, ready to try again.

We found ourselves at a tattoo parlor later that night, getting our ears pierced as we’d set out to nearly 12 hours before.

It was a long day of dead ends. And when we finally got it done, they pierced Emily’s ear far lower than she wanted. And they pierced my cartilage at a super awkward angle. But we were happy. We’d done what we wanted.

That’s what I learned with Emily — that some of the best friends to have are the ones who are willing to stop talking about doing things and just start doing them.

Through the three semesters that I lived near and with Emily, most of our adventures were birthed out of that same desire. She helped me develop my skill for jumping into action, for jumping into life. And sometimes when you do that you walk all day, and you hit dead ends, and you end up with piercings in places you weren’t intending to get them — But somehow, that’s all still better than just sitting at home and talking about doing things someday.