In O’Hanlon Family Christmas Letter Tradition, here is mine:

2015 was another full year for me. Somehow full, but not too busy, which I think is my favorite kind of fullness. There were enough spaces and places that were slow, quiet, and solitary that I was consistently faced with myself, with who I want to be in the world and what I want to get out of life.

I traveled a good deal in the first half of this year for personal trips and for the Story Project.

I launched The Story Project and have been able to give several people their written stories while I still have a few more to finish before the project is officially complete. Overall, I think I’ll continue with something like this but a different model. I’ve learned a lot about what goes into being a freelancer and being my own business head in the process.  And I’ve been touched by the stories of numerous people I otherwise wouldn’t have known. I have had to stop writing mid page on some because their story felt too personal, and the tears were coming too freely.

I set out to write people’s stories to let people know they’re not alone, and while I may have done that, I also found myself knowing again and again that I am not alone.

The biggest thing I have learned from the stories I’ve heard and written is this: I think that most of us are doing the best we know how, most of the time.

This spring I finished up my time living with my friend Kate in Colorado and it was a bittersweet closing on a very sweet chapter. But I moved away so I could move to Wichita, KS, which I was so excited about.

I lost my health insurance and gained a puppy. I read lots of books. Well, lets be honest, I read half of those books and listened to the other half as audiobooks.

I started selling my artwork in a local store here for the first time ever making me feel like a more “real” artist.

I started slack lining and disc golfing both in this year and they are two of my favorite hobbies now. A lot of fun and exciting big and little things happened in 2015.

I’m really, truly thankful that nothing particularly bad happened this year. It’s been a year of rebuilding, not of breaking. But in the interest of being real and not just talking about the shiny things, these were a couple hard things for me this year: I had a serious concussion this past spring which really took a toll on me for the months to come. I moved to a new town, which is always hard and takes a lot of energy (read: Is still hard and still takes a lot of energy). I faced some past demons, and realized I still had more serious anxiety and emotional turmoil to work through that popped up this year in unexpected places. I swapped financial stability for a house, which was not a bad move, but pushed me pretty far out of my comfort zone financially. 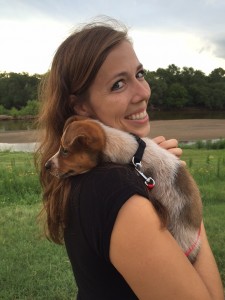 May I continue to wrestle and grow and learn. May you, too.

Merry Christmas and a Happy New Year to you!

Love, Jo and Phoebe (the puppy)