Jan 27– snow day and walk into the woods 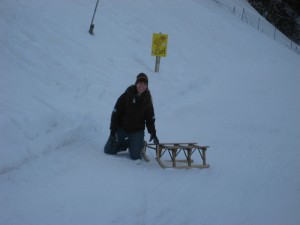 On monday the entire school (plus all the faculty from all the different EuNC learning centers all across Europe who were here for a conference) went to the Alps for a play day in the snow.  A few people snowboarded/skied, but the rest of us got “lift tickets” for sledding — or tobagganing to be precise.  Now, I had never seen a tobaggan in real life, so I was pretty excited!  Also… I’ve never got sledding like this before.  It’s pretty intense.  you go on this ski lift up the mountain, and then when you get out you pick up a tobaggan from the little storehouse there, and then you ride down this tobaggan track which is more than a mile long all the way down the mountain!  It was absolutely incredible!  As the day went on and the snow turned more to ice, the track got more and more slick… the faster I went, and the harder I fell…. and the more often I fell!  There’s some pretty good crashing videos that we got out of the day from brady’s camera (which semi-broke when he was filming, and then he crashed while filming, and i crashed into him hard, and then this other guy came and flew over top of us!  intense.).  All in all it was a great day and I came out with some great new friends (along with lots of bruises and sore muscles). 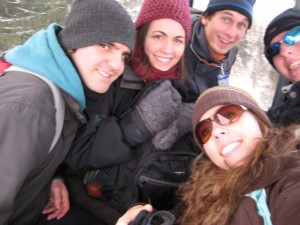 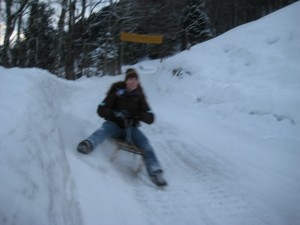 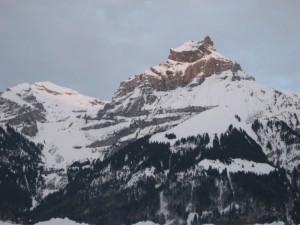 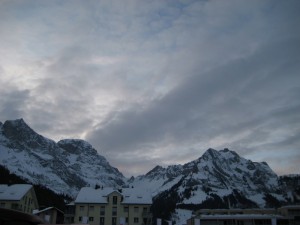 Today we also started classes:  They’re done in terms so I have 2 classes right now for the next 4 wks, and then another term will start and I’ll have another 2 classes, etc.  So they’re pretty full-force and intense.  I’m still trying to get my mind used to this.
Today, in between classes in the afternoon, I convinced Victor, Brady, and Signe to go on a walk to the woods with me.  On the way, we walked by a yard that had a yak fenced in (I had never seen a yak in real life, either… i was pretty excited!), walked over some green rolling hills, and then into the woods.  I didn’t realize it before we went, but there’s actually established trails/paths through the woods for people to walk/run on.  The paths are mostly gravel, but they were completely iced over, so we were sliding along them!  It was a pretty fun time.  We were almost not back in time for our next class… but because we’re such good students, we made it back ready to learn.  =) 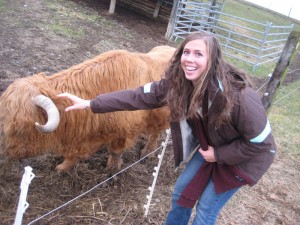 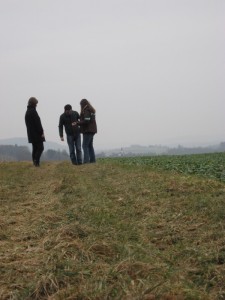 walking over the hills on way to the forest 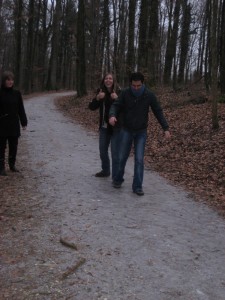 sliding along the icy pathway 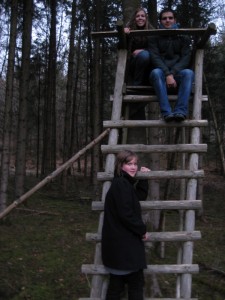 we found this lookout thing. not sure what it's used for.