So, I just withing the last few days have gotten my internet connection all set up, so before this point I’ve just been using a very sketchy wifi connection to check emails and such, and it took about 10 minutes for any page to load.  And the school here has a computer lab (read: a room with 5 computers in it.  =))  but those computers also have issues, i soon learned, and they didn’t have the slot for the memory card for my pictures.  So i’ve been saving these things to tell you all about my first week, and I will now post them in separate posts with the actual day they happened listed above, not to be confused with the day they were published on here.  =)

I arrived today.  My body is confused as to whether it should feel tired or anxious to run, or what.  It’s nine hours later here than at home.  I got to the airport, got my luggage, walked out and was met by a familiar face — brady.  (Brady went to Malawi and South Africa with me in 2007.)  Brady had come with a man named Jakob to pick me up.  As we drove the 40 minutes from Zurich to Busingen, we talked and caught up and Brady hand-delevired a letter to me from stephanie (they had met in olivet a few days before!).  The letter was a nice little piece of home after a long flight thinking about how far away from home I really was… I even squealed a little bit when he gave it to me.

As we drove we passed the rhine river… a lot… (I think we kept weaving over it again and again…), and then as we were getting into the “town” that is close to the school called Schaufhaussen, and then even in the dark… i saw up on this hill a huge stone tower… and then this massive wall that encircled the tower…. and I thought it might be… but i wasnt sure…. so I asked: “What is that up on the hill!?”  Jakob (our driver, and this amazing guy who works at the school with his wife) said casually, “Oh thats an old old castle up there…”  I freaked.  I live 2 miles from a castle.  I’m determined to see it in the next few days… I’ll walk there soon!  Seriously… a castle…. oh my goodness.  this is a different land. No wonder all our fairy tales come frmo Europe!

When i got to the school (which is in a very small village called Büsingen and sits right on the rhine river), I walked into my dorm and met my roomate and met her mom (who i realized I had met in April in Seattle at a 30 hr famine I had spoken at… small little nazarene world).  I walked into my room and it’s HUGE!  Then i noticed it… we have a HUGE window!  i proceeded to open the window, realize there was no screen, and that it leads onto the roof, and so I climbed out onto the roof, and it’s an incredible thing.  So cool… you can see the stars and see this church thats almost a thousand years old all lit up on a hill nearby.

After unpacking everything, our room looks kind of empty because it’s huge, with tons of storage, and we coudln’t bring very much because we flew here, but it’s good.  We also have a good kitchen, and my roomate and I get a bathroom to share (with regular tub, shower, sink and toilet).  It’s a really nice set-up here. We have church tomorrow so I guess I’ll meet some more people there…  I met about 8 students tonight and they seemed really cool.  I think i’m going to like it here.

Also, I arrived after dark tonight, so I’m excited to see this place in the daylight tomorrow! 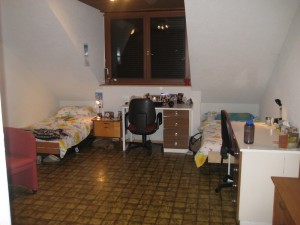 my room -- theres a whole wall of closets unseen here... plus 2 bookcases.