Interact – You can do it, too. 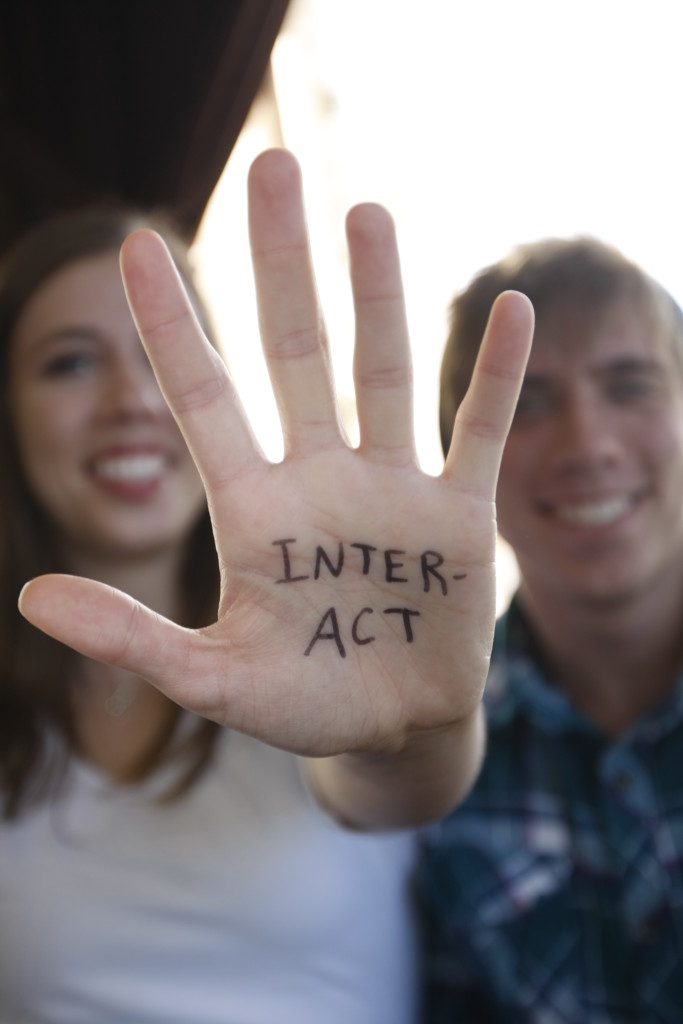 My brother sent me a post on facebook recently that I loved. It didn’t have any information on it, so it’s hard to verify if it’s true or not, but it said, “There are libraries around the world where you can check out a person as a living book and listen to their stories.”

If you’ve read almost anything I’ve written recently, you can guess how much I love this idea. But I noticed many comments on the post echoing a thought in the same key: Why go to a library to hear some stranger’s stories when we don’t even bother to talk to our neighbors or the people around us in restaurants?

I have become more introverted as my years have increased in number, so while I am talkative many times, many other times I really do enjoy the solitude and aloneness that can come from traveling alone or dining alone in the company of only strangers. I think we’ve all probably been trapped on a plane next to someone who wanted to talk the whole way when we really just wanted to sleep, read, think, or whatever else it is you do on an airplane.

There are of course times, and signs that those social conventions should be abided by (in my opinion). For example, you never need to talk to someone in the next stall over in the bathroom unless you need to embarrassingly ask them to pass you some TP. Or, when you’re at a cafe and you see someone with both of their headphones in, working away at something, it better be for a specific reason that you’re approaching them and asking them to disengage what they’re doing (like, “hey, I’m having a heart attack and my phone is dead, could you call 911 please?”). Not just for general chit chat.

But what I’ve found is that when I get over my fear, my social anxiety that our culture affirms that tells me to just stare at my phone instead of engaging the people around me, and when I finally venture out of myself into the world of others, I have found some beautiful interactions. I have found some beautiful people that are in my life now in large ways because I engaged them or visa versa who I otherwise would’ve just passed by.

The comments on the facebook post are right: we are surrounded by people with incredible stories that we don’t know on a regular basis, and we’ll continue to never know them unless we begin to interact.

I do it the cheating way: I ask people to tell me their stories so I can write it for them, which is an incredible blessing to get to sit in those spaces and hear those tales.

But before I was ever a writer, I was a toddler that would ask you who you were, where you lived, what did you believe.

Then I was the little girl who reached out to the middle aged woman struggling on the ice skating rink and asked if I could help her, and continued to skate with her for the next hour.

When I was very young it came naturally. But then adolescence hit and it was more uncomfortable to reach out. So it became a discipline instead of a natural disposition.

With this discipline, I was the middle school student who went to summer camp and met every single counselor there, and then continued to be friends with many of them for years later — up to and including one who opened a crossfit gym in my hometown when I was an adult and became my trainer.

And on and on.

Some of the dearest people I have in my life today are there because I thought, “What do I have to lose?” and I talked with them, reached out, interacting in non-extraordinary ways that sparks extraordinary friendships, adventures, and tales.

So, as I challenge myself regularly, I challenge you: Reach out. Interact. See what happens.

If you want to reach out by encouraging someone you know to have their story written (so you and others can read it and know it), contact me directly (info below), or have them look over the story project website and contact me for next steps.