Four napkins, two bags, & a smile: A Story from the Soup Kitchen 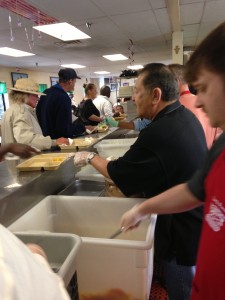 He just stared at me as he sat, his mouth never moving from that seemingly permanent frown. His eyes were open wide though, and they were on me. Not in a predatory way. Not in an offensive or angry way. Just observing, intently, as he sat silently.

One of the perks of working for Abram Interstate Insurance Services, Inc. is that we get the opportunity once a month to volunteer at a local charity organization called Loaves and Fishes and are given leave from work to do so. It’s in Sacramento, Calif., and it’s motto is “feeding the hungry, sheltering the homeless.” The organization has many programs that assist those in need in Sacramento. One of their most visible programs is their Dining Room operation. Seven days a week, 364 days a year, Loaves and Fishes’ dining room is open and serves a balanced midday meal to their 600-1,000 guests that come in each day.

Usually Abram Interstate employees volunteer early in the morning doing food prep,  getting the midday meal ready for the guests that will come in hungry that day. This alone is rewarding, but not very glamorous. We do things like shuck corn, peel potatoes, cut onions — and you learn things like the fact that cutting onions for a meal for 600-1000 people will make you cry approximately 700,000 tears and that you will smell like onions until you shower. Twice.

Even in those times though, we work side by side with other volunteers from the community. Some are retired law enforcement, some are people who just want to give back. Some are there because of court-mandated community service, and some are there because they’re part of Loaves and Fishes programs, and they are working in the dining hall to gain work experience as a part of their road to getting off the streets.

Every few months though, we get the chance to volunteer actually during the meal. We get to help serve the food, clean the trays, buss the tables, and talk with the guests. That’s what I was doing on Friday —  making the rounds to all the tables offering extra napkins, refilling water pitchers, offering water cups, and wiping down the tables after the guests left to make room for the next.

I kept passing this frowning gentleman, briefly making eye contact with him each time I passed to make sure he wasn’t needing napkins or a cup or anything. He never motioned for anything, just kept watching.

As I made my way around the room, I was at ease. This is one of the few types of places where I feel at my prime. My mouth was tired from smiling so wide. I love talking to the people, sometimes just chit-chat, but when it was slower, I’d actually get to ask about their lives. One elderly gentleman was heading to the park after he ate so that he could people watch.

“People watching is one of my favorite things. And the park, that’s one of the best places to do it on a nice day like this,” he relayed, leaning in from his wheelchair as he said it. He was hard of hearing, so he leaned in each time he spoke at a normal decibel, like he was a young boy telling a fun secret, a smile on his face as he spoke.

“What’s your name, sir?” I had asked him earlier when I had brought him his meal. He had been hunching over, his gray stubble accentuating his taught mouth. He didn’t seem rude, he just seemed curt, quiet.

But when I asked his name, this boy inside of him woke up. Leaning in, his grin spread all the way across his stubbled face, “Bob O. from Sacrament-O,” he beamed in a sing-song voice.

Despite many interactions like my friendly encounter with Bob O., the frowning man sat in the middle of all of this commotion, and he never said a word, his lips never budged from their downward arch.

He stayed a long time. The people around him changing, me coming around offering napkins and take-away bags to most everyone around him, he sat there, long after he’d finished eating, just watching.

And then, as the table around him was clearing out, and the crowd was thinning, he raised his hand subtly, one finger pointing in the air as I glanced his way, my signal to finally offer him something. I went over to his side, smiling, but tentative.

“Can I have two bags? And some napkins please?”

“Sure!” I was glad to be able to do something small for him. And glad that his face seemed softened now. He still wasn’t smiling, but the muscles in his face had relaxed. And his eyes weren’t so intent in a watching way. They seemed soft now, too. Not so wide.

“Is two enough?” I asked, handing him the two napkins I had pulled from my apron pocket.

“Um, maybe more than that if you could. My girl and I, we’re going to the park.”

“Four? Is that enough?” I said, handing him two more.

“Great!” I said, about to bustle on, pretty sure this gentleman wasn’t a talker beyond his simple requests. I was turning to go when he gently put his hand on my arm, turning me back toward him.

“I just,” he started, “I just wanted to tell you something.”

I was expecting a comment about being beautiful or something to that effect. You can judge me for that, but I’m pretty popular with homeless and hungry men. I chalk it up to my semi-weekly showering habits.

“It’s just…” his voice was soft, almost shaky. He looked down at his hands before looking back up at me with his large, attentive dark eyes.   “I don’t smile at all. Because, see, I got a lot of sadness inside.”

My smile faded. This was not the flattering, “you’re beautiful” comment I was expecting. This stoic man was telling me something real. I was ready to listen.

“So I don’t ever, smile,” he continued slowly. “But I want to thank you, because you made me smile today. I don’t remember the last time that happened.”

I don’t know when he smiled through the course of the hour he had been there. I had missed it in the bustle of the day. And he wasn’t smiling when he told me this touching note of thanks. But he said it had happened. And that matters to me.

“What’s your name?” I asked him, humbled by his sweet words that he’d struggled to say, like a painful confession.

“Gilbert, I’m Jo.” I said, as he reached out his rough, wrinkled hand to shake my kitchen-gloved hand.

We chatted a little more about our stories, about sadness, about his needs, his worries for his children. And then someone behind me was calling for napkins, and I had to go. He got up, took his bagged leftovers and his four napkins, and left. As he was walking through the door to outside, he looked back.

“Bye Gilbert,” I said from across the room, waving as I handed a napkin to another guest. I smiled, not my bright toothy smile, but softly, touched by this man’s sad, grateful words and story.

He waived slightly, and smiled. I saw it that time. Then he was gone.

I’m continually awed by these small moments, made of nothing but a few minutes of life, where real life is shared in a dining hall, on the street, in front of grocery stores. I’m awed by the power of a smile. I’m awed by the way my heart is changed by the people who are willing and vulnerable enough to share their stories with me. I’m awed by this sometimes sad, beautiful life. What a gift.

Joanna O’Hanlon is an adventurer and storyteller. She tries to be honest about the ugly and hard parts of life, and the beautiful parts too. This blog is one of the places she shares her thoughts and stories.