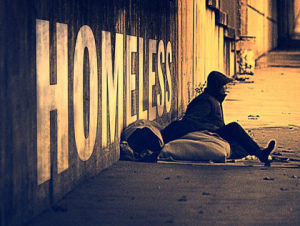 He observes my extended hand, waiting to be shaken, and he slowly extends his own. He has been on the streets a while. I can tell by his hands.

They’re calloused, dry. They’re painted by dirt that’s been baked into the pores, filling the cracks in his palms like mortar. They’re the rough hands of a farmer, a welder, or of a homeless man on the streets of San Francisco. If you washed them, they wouldn’t come clean.

This man tells me his name is Chador. We exchange a few more friendly comments, and then my friend and I bid him goodnight, and we walk to the car, on to the next part of our evening in the city.

I can’t help but feel that a holy moment has just taken place. It hovers like a mist among our heads, and as we walk down the street away from the man, it thins, and then wisps away. The moment has passed, and it’s another ordinary night.

As I was in San Francisco earlier this month, I was reminded that it was there that I first interacted with people on the street. I was almost 16, and I’d been to the city a couple of times — only spending time in the touristy areas by the bay. That time, though, I was a part of an inner-city cultural immersion team through a Christian organization called Center for Student Ministries.

We spent our time in soup kitchens, food banks and on the streets.

The first man I met in San Francisco that week told me his name was Turquoise. He had come to San Francisco several years prior on a business trip and he never left. He’d been living on the street since then. After being in the business world for over a decade, Turquoise burned out, and while life on the streets was uncertain and hard, he felt freer there.

His hands were the first street-hands that I noticed — worn hands belonging to a worn man. Since then, I always notice their hands.

I have learned some of the most real things I know about being human from people I’ve met on the streets.

They are people who know desperation and loss, who are clothed in regret, who know that life is too hard to take sometimes. People who are used to being ignored. People who rely on the scarce mercy of others to fill their stomachs or quench their alcoholic thirst. People who are prisoners to their addictions that numb the pain, to their avoidance of those they’ve hurt, to their wounds that disable them.

They are people who know what it is to band together, who know the grace to be found in leftovers or a $5 bill, who know that their previous choices weren’t worth whatever they were hoping to gain. People who know how to share, how to give, how to persevere. People who continue to hope in the face of despair.

They are people who know that when they have nothing else, their lives still tell a story for those that will listen.

The simplest and most important thing I’ve learned from these men and women, though, is that people matter.

Whether they’re homeless or homed, rude or polite, sane or insane — people matter. What I’ve come to see is that whether I can offer help or not, I can always stop, look them in the eye, shake their hand, tell my name and ask theirs. If they’re willing, I can hear a bit of their corner of the story of what it means to be human.

San Francisco’s people taught me that and I’ve taken it with me wherever I go. I’ve seen again and again that when my clean, unscathed hand reaches out and grasps the hand of someone “homeless” or “in need,” while our hands have as much contrast as our lives, there is a holy transaction that takes place when I, or anyone, stops to appreciate the value of another human being. I think these holy moments make me more human, too.