This past weekend I went to Munich with a group of friends.  (Awesome discovery: In Germany you can buy weekend train tickets for a group.  You get one ticket per 5 people, and the ticket only costs 35 Euro, so like 7 Euro each, and you can go anywhere in Germany on that ticket for as long as you want between Saturday morning and Sunday night.  How cool is that!?)  The train ride was about 5 hours each direction, but it actually went by pretty fast, and on the way back I slept most of that time.

One thing I really wanted to do while in Munich was to go to the concentration camp that’s about 40 minutes out of the city.  However, on the way there we realized it wasn’t a good time to experience it.  We had limited time in Munich as it was, and it would take much more time to go out there, spend the time necessary to really take in the situation at the camp, and come back.  So, perhaps another time I’ll get to do this.  Yet, even besides that… I had an incrible experience.  And something happened that I’d never been able to fully anticipate how it would feel:

This weekend, I had my first encounter with a king.  Actually… two kings.  And they were dead.  Ludwig I and Ludwig II are kept in urns in the ballroom of their palace in Munich.  They are Bavarian kings whose ancestors made the palace in Munich their summer home, yet it was later turned into the main palace for these royal men.

It was a phenomenal palace.  I was stunned.  Honest-to-goodness breathtaking.  The first room we entered was their grand ballroom and it was absolutely awe-inspiring.  I could not believe my eyes and believe that not only was I actually in a real place that looked like that, but the fact that a place that truly looks like that exists and was used by real people in their daily lives!  The idea of having someone I would refer to as “Your Majesty” is beyond me.  Yet, I gained some perspective as I saw the intricate details of the palace.  You can tell a lot about someone based on their home.  This was no different.  Everything was ornate.  No ceiling was left unpainted.  At a certain point not too long after entering the ballroom, I found myself laying down on the floor in the middle of the room just gazing at the ceiling because it was so huge and so intricately painted.  The painting alone was an impressive work, not even considering the massive, gold-laden room it topped, or the many crystal chandeliers which hung from it.  I couldn’t stop saying “Oh my gosh! oh my gosh!  I can’t believe this is real!”  (The guards were all laughing at me and they told me I made their day because my reactions were so incredible!)

Then, as I was walking through the palace looking at the different chambers, admiring the utmost beauty and wealth of the place, a thought struck me:  “If I were living in the day and age that this palace was in use, and I was who I am, I would never have been allowed in here.”  It was such a weird thought.  Coming from a land where equality is preached far more than it’s even practiced, I have never felt seriously inferior because of my social status, my parent’s occupation, my place of residency, or my type of schooling.  Yet all of a sudden, I got a glimpse at how lowly I would’ve been seen as being by their society.  And I realized that in comparison of my social standing to that of the king, the gap would’ve been far too great to fill, and I wouldn’t have been allowed in the palace for anything, let alone to be the king’s treasured company.

I was in this beautiful place that left me speechless, and I knew it was a place where I didn’t belong.  I was inferior.  This place was not made for me.  It was made for a king…

All of a sudden, John’s statement about Jesus being a man “whose sandals I am not fit to carry” carried great significance.  I’ve imagined God as my king before… but that’s just it… it was all in my imagination, just as any king would have to be.  But suddenly, standing where previous kings stood, touching the floors where their parties danced, being surrounded by grandeur, the lives of king became more real to me.  And God became more real to me in all His splendor.  I was humbled, and filled with awe at just how great His grace and love are that they surpass even greater social gaps then me and an earthly king.  I knew I had encountered someone great: not dead Ludwig I, or dead Ludwig II – they are only ashes.  I got a small glimpse of my King.

Now I not only have a picture of God as a jewish carpenter who was homeless and then strung up on a cross… I also have a picture of Him in His palace, seated on His throne.  and suddenly I saw once again that I have not the slightest idea how Great his love is… 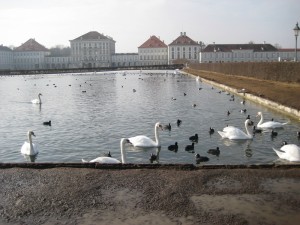 the palace from the front 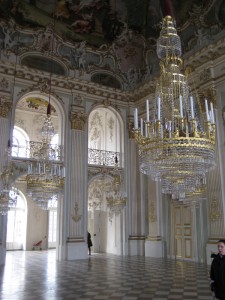 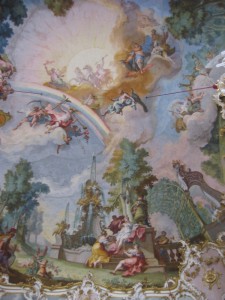 Ceiling of the ballroom 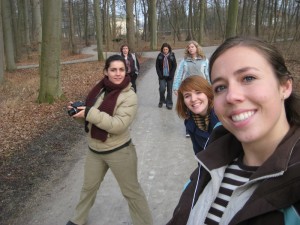 taking a stroll in the palace grounds 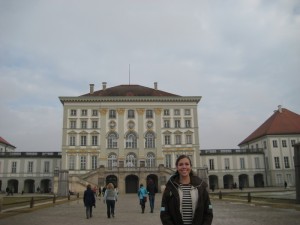 the back of the main part of the palace 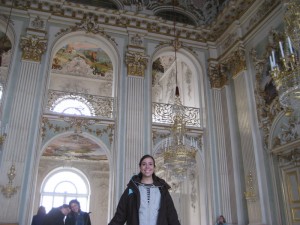 me in the ballroom! 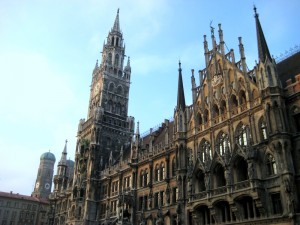 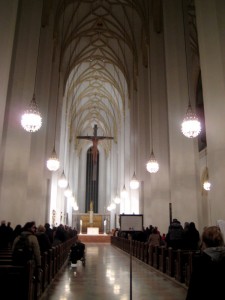 we also went to sat. night mass at the Pope's Church 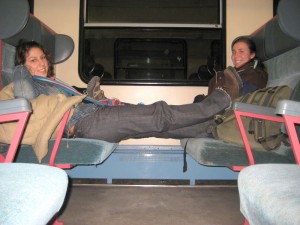 Florentina and I on the train ride home