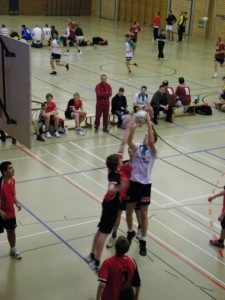 Frank making a sweet shot in his shorty shorts

So today Brady and I went to go watch Frank’s basketball tournament in Schaffhausen.  Frank’s dad, Antonie (the Academic Dean at EuNC) ended up calling and offering to drive Brady and I to the gym.

So, we got to the gym, watched Frank play (on two separate teams!) and played some cards in between his games.  (By the way, Frank is actually really good at basketball… probably due to a mixture of his height, his time that he spends watching basketball and “studying the techniques” of NBA allstars on youtube, and the time he spends actually playing! =) )  Swiss basketball is a bit different though, including their uniforms, haha!  (See picture below.  I didn’t know if I was in switzerland or 1970’s in the US with the prevelance of short shorts!)  They also don’t hard dribble, but instead they pass pretty constantly. They have a rule that if you dribble, and then hold the ball in two hands, you can dribble again, but you can’t hold the ball in two hands again until it’s been passed to someone else.  So, as a result, they move over the court by pretty much just passing non-stop.  It makes the game seem busier, yet there’s not a lot of quick break-aways down the court or anything.  It was cool to watch, though.

Antonie was planning on coming for the end of the tournament and offered to drive us back then, or said that he could come get us earlier and drive us back.  But, we felt bad about having him go out of his way to drive us (again!), and we couldn’t really wait until the end of the tournament… so we decided to head off on foot and walk back.  I was pretty sure i knew the general direction, but apprently, we took a wrong turn somewhere, so I ended up stopping at one point and looking across a valley of houses, and I noticed a tower that’s part of the old city wall, and realized THATS where we were supposed to be heading.  So… we found our way to the Rhein and walked back along the river.  We did run into some fasnacht celebrators along the way who had thrown a parade.  It was…. interesting… =)  (Fasnacht is like a carnival celebration that people here celebrate for a few weeks before the Lent season begins.  People dress up in costumes and party a lot… it’s like a form of mardi gras.) 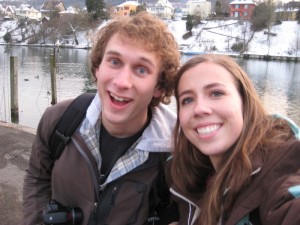 walking back along the rhein

All in all it was a fun, relaxing adventure for the daylight hours.

After we got back, some of us students got to be involved in Montague’s marriage proposal to Jennie that night!  We acted out scenes from different point in their relationship up until that point and then he proposed.  She was surprised and they’re both so happy!  It was so cool to be able to be a part of their special story!

Then, after watching a movie with a friend, I got attacked by some girls from my hall with flour (apparently the flour war had started in the kitchen and they brought it down 3 flights of stairs especially to me.  =) ).  While still covered in flour, the girls from my floor and I finished out the night by going to McCafe (mcdonald’s version of coffee) for coffee and hang-time.

Overall, I’m pretty sure this goes down in the hall of fame as best overall day for valentine’s day, ever.