Colorado calls mountains above 14,000 feet in elevation “14ers” and they have many of them in the state.

The previous fall I had climbed my first — Mt. Bierstadt, 14,060’ at the summit, 2840’ elevation gain from the trailhead, and a 7-ish mile trail. I say “ish” because Kate and I climbed it in the first weekend of Nov. 2013, and snow covered the entire mountain. There were many times where we had no idea where the trail was, let alone if we were near it.

A mountain that normally has thousands of hikers ascending and descending at a time in its summer days sat solitary and snow covered. We saw 6 other hikers on the mountain the entire day.

But we made it to the top, and back down again, despite very serious thoughts from Kate on how I was going to have to cut her frostbitten toes off. And despite the fact that my lips were literally blue by the time we got back to the car, and took about an hour of full-blast heat to get them to purple. All in all though, the trail was manageable for us (because we were in good shape to prepare for it), but the snow had made it difficult.

It had been a year since then and I’d wanted to hike another 14er, but had been told I shouldn’t go by myself. So I’d waited and tried to find times when Kate or someone else could go with me when there wasn’t snow on the roads and wasn’t too much snow on the mountains. But the season winded down and I still hadn’t gone, so I decided I wanted to go it alone.

I’d read “Wild” (which I would highly recommend, both the book and the movie) where she hikes the Pacific Crest Trail alone and it’s a soul journey for her as she works through her grief, through her brokkenness, and does hard things with her body as she processes the hard things of her heart. I’d thought about it and I really wanted that physical hardness to accompany the hard stuff I was wrestling through.

So I decided to climb Quandary Peak, 14,265’ summit, 3450’ elevation gain, and 6.75 mile trail. I thought, OK this mountain looks like it doesn’t have too much snow on it right now (which it didn’t for much of the trail, thankfully), and it looks like a similar kind of climb to Bierstadt, so I should be fine.

I knew I wasn’t in as great of shape as I had been. I’d been running much less since arriving in Colorado and I knew my lungs had still not really adjusted to exercising at the higher altitudes. But I had to have acclimated somewhat, right? And I’m a generally fit person. So I decided one night the next day was it. I packed myself some snacks, some warm clothes (which I didn’t need), and I went.

The parking lot had one other car in it, as it was again, one of, if not the last week of the season. That car had 2 hikers in it that I passed back and forth, leap frogging one another for the first mile or so, and then I said, “I’m gonna sit and take a break,” and they went on ahead. I wanted to be alone. 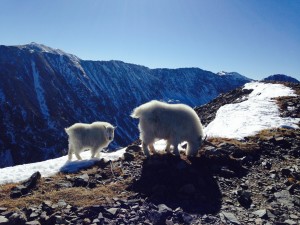 I saw one other hiker, a woman photographer who I passed about 2/3 of the way up the trail. She was distracted and hanging out photographing these beautiful mountain goats that were right there next to her. She stayed there the entire time it took me to summit and come back down.

Which was a long time. The last mile or so was extremely difficult. The trail up until that point had been fine, I’d even say easy. But the last mile is where you gain the majority of that elevation. Steep rocky step after steep rocky step led to me having to stop for breath every 15 or 20 steps. The last half mile was downright suffocating. That last bit felt like I was just going straight up. At that point I was stopping every 3-5 steps to bend over briefly trying to catch my breath. I hadn’t eaten since leaving the car and my plan was to eat my lunch at the summit, and then eat a snack on the way down.

This part being as difficult as it was, was taxing me though. Thoughts of “I don’t know if I can do this,” started to crawl into my brain as my throat began to feel swollen from all the wheezing I was doing. Soon I began to cough, and my throat went raw. Each breathe was laborious and painful. I finally compromised, I’d stop there where I was, near to the top, and I would eat my lunch there, take a bit of a break, and allow myself to get some energy to get the rest of the way up.

But when I opened my backpack and started rummaging around, I realized there was not a single ounce of food to be found. Before I had left the car I had taken my bag of food out to remove some of the excess warm layers I’d stored in the bag underneath the food. I knew I wouldn’t need those layers, but somehow I’d managed to accidentally not put the food back in.

I was most of the way up a mountain, exhausted, wheezing, starting to shake from hunger and low oxygen, and I didn’t have any food. And like I had set out to be — I was alone. No one was there to offer a part of a power bar or a stick of sugar-filled gum.

Despair and a bit of panic started to rise in my hurting throat. My raw, red nose ran as I was now in the snowy part of the mountain, and my head pounded from the cold. A single tear rolled down my cheek as I thought, “OK. I guess I’m not going to do this.”

I took a couple minutes sitting there on a snowy rock, watching a couple of mountain goats on a ridge farther down, and decided I’d at least take in the view before admitting defeat and beginning my shaky decent.

But somewhere in those moments, I started to think of the hard life journey I’d been on over the past 2 years. About the nights where breathing under the weight of grief was harder even than it was now. When I was alone for days on end, feeling shaky. Feeling dizzy. Feeling defeated. And I thought about the long, hard, arduous task of pulling myself out of the hole of brokenness and starting to rebuild. And how much of that — most of that — I had had to do alone.

And I looked up at the rest of that mountain, all the way to the summit, and I said out loud, “I have done harder things alone than this. I can handle a little mountain.”

Which was probably not wise. Emotionally, it was true. I had handled harder. But I may have been a little more driven than I ought to have been.

Either way though, I found a piece of sugarless gum and hoped maybe it would trick my mind into thinking that it was some sort of food and have it summon some energy. I took one treacherous step after another. By the end of the ascent I was taking a short pause after every single step to breathe. And then All of the sudden, I was there. At the top of the mountain. It was done.

It was also freezing, and my body was still wanting to shut down, so I only stayed a few moments. There was nowhere un-snowed-on to sit, so I crouched for a minute by the summit placard, I looked around at the 360 degree view, and let my breath finally, finally catch up with me, and then I did what you have to do in life — I got up, took another deep breath (as deep as I could) and I put one shaking step after another and started walking again.

The way down the mountain was much easier, but still not easy. I ended up rolling my ankle on a large rock and spraining it pretty badly about a half a mile down. That slowed me quite a bit.

By the time I had gotten back to the car, I was down at a warmer elevation and had been moving briskly enough that I was hot. I got to the car and stripped down to nothing and just sat there for a second. No one else was nearby and the one other car in the parking from earlier had left already. I took a drink of water. I ate a bite of salami. And then I redressed in fresh clothes I had brought along.

I was still shaking, but I felt good. My body had caught up to my heart, and together, they had proved that I somehow, deep down in the places you don’t want to have to summon strength, I have the strength to do hard things alone.

People may pass you or leap frog with you on the journey. They may even walk with you for a while. But there are some paths in life that you are forced to walk alone. It is those paths that reveal our deep guttural reserves of strength and resilience.

Should I have climbed that mountain alone? Maybe not. Was I in good enough shape and prepared for it? Definitely not.

Physically, nothing had changed, other than my throat being sore and having to cough often for a few days after. I walked with a slight limp for about a week. But it got my heart and my body back on the same, resilient page. It changed me. It reminded me that when I have to, I can climb the hard mountains of life, even if I have to do it alone.