“But Does He Love Jesus?” A Satire – 22 better questions to ask

I’m not dating anyone right now. But I can guarantee you one thing: if I were, about 50% or more of the people in my life, upon me saying I was dating someone, would ask two questions: 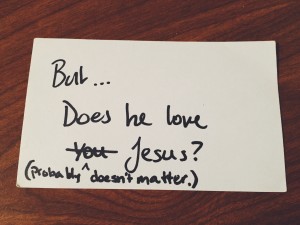 Growing up in the church, it was clear to me that a potential partner (i.e. anyone I’d date, because why, for the love of pete, would you date anyone that you weren’t “probably going to marry”? —I have thoughts on that for another day) needed to go to church and be a Christian. Which, by the way, is the real question lurking behind the guise of the trite question “does he love Jesus” for at least 50% of those 50+% that ask.

Being a christian (read: church culture participation) was the most important thing. So much so that the people who know a guy or gal marginally enough to ask whether the person they’re dating loves Jesus often stop asking about the person after that question is answered.

My parents have been delicate in this with me, which I appreciate, but I didn’t know exactly what I thought about it until a couple years ago when I started to date someone who didn’t know how he felt about God and was not involved in the church. “American Christian/agnostic” was probably a good description of where he was at.

While we’re weren’t in a relationship, just going on dates getting to know one another, I found myself one afternoon in a car with my mom when she brought it up. I could tell she’d been thinking about it a while. It wasn’t her first or second question about him. But it still came to that question, or rather that concern (which, for the record, I think is fine. Parents, I hope you hope for what you believe to be best for your children. Christ, christian culture, church, whatever included.)

“I am a little concerned about the whole belief in God thing, Jo,” she said sensitively. I knew she brought it up because she cared.

My response, though it did not feel defensive, felt heavy, and my words surprised me and educated me on how I felt as they left my lips.

“He treats me well. He’s kind to me. He respects me as a human being. I’m sorry mom, but those are things that are more important to me right now than him believing in God. I’ve been hurt and disrespected by men who believe in God before. I’d rather date a kind, respectful man who doesn’t know what he believes, or knows that he doesn’t believe in God, than the opposite.”

I still stand by that. Because when it comes down to it, loving Jesus is a matter of the heart, and it changes you. I have known, and known of, far too many “christian men” who act in ways toward others I would never desire. I will choose a man with a loving, kind heart like Jesus’ heart (whether he thinks Jesus is a falsity or not) first and foremost, every time.

Ideally, I think life is often easier when couple’s belief systems line up. Ideally, I’d like that for my own life in the long run. Heck, ideally, I’d like to figure out what my belief system is for myself at some point. But when it comes down to it, when I’m dating someone, I will have far more questions that are more important to me than what his name is, and does he “love Jesus.”

Here are some good questions that should be answered about the man/woman you date or those you care deeply for are dating:

But hey, pretty much all of these are fine if he goes to church. You know that, right? You didn’t? Oh, good, now you guys are set.

*Note. This is satire. If you didn’t catch that. Just wanted to be sure.