My parents and brother just came out to Kansas for Thanksgiving and they drove the last of my earthly possessions here with them. Which means, I finally have all of my books with me again.

As I unpacked the 6 or 8 boxes of books and started to sort them into piles to put on the shelves, a definitive sense of comfort came over me.

My whole life I’ve loved books. I’ve always had more books than I have had toys or anything else.

I’m not a fast reader, or a voracious reader by any means. In my adult life, I have to be intentional to spend time reading books because, well, Netflix is easier. But I want to be a reader, I like being a reader, and most of all, what I love about having my books back with me is that I love to SHARE what I’m reading.

I’ve said that for a long time to those who’ve scoffed or smirked at my full arms at used book sales (or my many boxes while moving so many times — which by the way, I sadly now only have about 1/4 if that of the books that I once had do to purging for moves).

I like to own the physical copies of books so that I can tell someone about a book and then offer, “I own it — do you want to borrow it?”

My mom actually even brought a copy of the Kite Runner with her in her suitcase, “I found this and I know that you leant it to me at some point but I think this is your copy.”

There’s something about sharing the story that makes it even better.

So, as I was looking through my books, I thought I would share some of my favorites with you in case you’re in the mood to read this holiday season and need some suggestions. 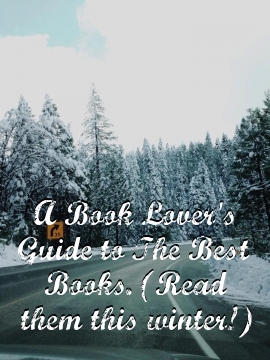 Crime and Punishment — I’ll preface it this way: Most Russian novels are long, sad, and have lots of characters so they can be hard to get into. BUT, this is one of my favorite classics. If you’re a sucker for redemption in non-fairy-tale ways, and you want to feel the hardness and sadness of the world along the way to that redemption, read this. Tell yourself at the start that you’re going to read the whole thing. I’ve only read two classics more than once, and this is one of them.

Pride and Prejudice  — If you want something much lighter than C&P, go for P&P. Men, this one is more of a woman’s pleasure (though if you like witty banter and well-told angsty love stories, please do read). “What are men to rocks and mountains?” Elizabeth Bennet asks. I ask that every time I climb a mountain. It’s a fun one, a great one. And it’s the other classic I’ve read more than once.

Lord of the Flies — Another fast read, and largely a similar premise to the TV show LOST. What happens when a plane full of prep school aged boys crashes on a desert island? Find out. It really is thrilling.

The Old Man and the Sea — If you’ve never read any Hemingway but you want to, (and/or maybe you want to be able to say you have), this book is a great, super short intro to Hemingway. Also, if you love the sea (in a sailor kind of way, not a lay-on-the-beach sort of way), this is gonna be a good one, and much more palatable time-wise than the monster of a book, Moby Dick.

Farewell to Arms — If you’re ready for more Hemingway, I love this book. It’s centered on the story of an ambulance driver for the Red Cross in Italy during WWII and it’s painfully good.

Our Town by Thornton Wilder — You’ll be faced with the thoughts on what matters most in life and death, and what your town, your community means to you.

The Incident at Vichy by Arthur Miller — Miller is definitely best known for 1) being married to Marilyn Monroe and 2) being the author of famed plays Death of a Salesman  and The Crucible. But this little known play I stumbled on in a used book sale, and it has haunted me ever since. It’s a short, simple read, that poses the question through the characters: If you could switch places with someone and spare their life by giving yours (in this case for a Jew in Nazi controlled France), would you?

Newer Books that will be Classics soon:

The Kite Runner — I’ve probably given away more copies of this book than any other. The story feels so real, so true, so compelling that I couldn’t stop thinking about it while I was reading it. So many times I went to the author’s bio online to see if this stuff actually happened to him because it was so well written  and such a good, gripping, crazy story. Also, it really helps paint a picture of how Afghanistan changed hands to the Taliban and what that meant for the people on the ground there. Important read and really really good read.

The Things They Carried — This is my favorite book. Period. It’s set in the Vietnam war, told by a character that shares a name with an author, Tim O’Brien, who also served in Vietnam. But throughout the book, the narrator tells you “This is not a true story.” Just when you read something that is so crazy vivid, so specific that you swear this had to have happened for real, the narrator says, “I’m lying to you. This is not a true story.” Read it. It’ll drive you crazy and you’ll love it. It’s that good.

The Life of Pi — A kid and a tiger are on a life boat at sea trying to survive. It’s a story that touches on all the themes of humanity, including sanity. It’s really, really good and easy to get caught up in.

Extremely Loud and Incredibly Close — A kid loses his dad in the 9/11 attacks. He then goes on a secret mission through the burroughs of New York trying to find the lock that matches a mysterious key that his father had. He meets the city through his quest, different people all affected in different ways by the attacks and by life, and also, they meet him. It’ll grip your interest and your heart.

Squirrel Seeks Chipmunk by David Sedaris — Most of Sedaris’ work is nonfiction essays and they’re all amazing. So read anything by him, and it will all be funny. But this anthropomorphism book is not strictly nonfiction because he uses animals as the personas for his incredibly funny stories, but it’s amazing. And a fast read, too. I read it in two sittings at a Barnes and Noble, and then still bought it because I knew I’d want to re-read it again and again.

The Year of Living Biblically by A.J. Jacobs — Jacobs, an agnostic Jew who lives in New York City and writes for Esquire magazine decided to follow the Bible’s laws for a year. All of them. Like even the ones about not sitting where a woman has sat when she’s had her period, or not wearing mixed fabric clothing. What ensues is really funny, really educational, and really eye-opening to christians and others alike.

Into the Wild — This book is the best book I’ve read in the past decade. And it’s the best non-fiction I’ve ever read. Period. John Krakauer delves into the story of a young man who set off into the alaskan wilderness on a quest to find himself and experience nature but who dies while he’s there. Like a detective working backward through the clues, Krakauer, a journalist for Outside magazine, tries to find out what happened and to make sense of it all — for the world, for the young man’s family, but most of all for himself. I saw more of myself in this book than I was comfortable with, and that is always compelling.

Angels and Demons by Dan Brown — I read this book while studying abroad, about to go to Rome (where it’s set) and you actually learn a LOT of true historical information while just reading this thrilling tale of murders, secret society conspiracy, and papal scandal. I read the last third of the book laying on my friend Sara’s bed while she studied and I was so distracting with my exclamations of “WHAT??!!” and “Noooo!” that she made me leave the room. It’s Dan Brown’s best, even still.

Gone Girl — You’ve heard the hype. It’s true. It’s so well written and I did NOT see some of the plot twists coming. I actually listened to this one on audiobook and the version that’s on audible.com is really, really well done.

The Time Traveler’s Wife — Men, disregard probably. Women, um, read this now if you love a good love story. I loved it. Loved  it.

Private by James Patterson — I also listened to this mystery novel on audible.com and would recommend it. Typical but well done murder mystery. Really enjoyable.

The girl with the dragon tattoo/who played with fire /who kicked the hornet’s nest: This trilogy is incredible. I will give you this disclaimer though, the author was Swedish and, like the Russian novels, it has a lot of characters and so it takes a while to pick up steam (and they’re long). I listened to the first one as an audio book on an 8.5-hour drive down to college after a break and the first few hours were slow. But by the time I got to school, I couldn’t stop. The next few days I was listening every single chance that I got until it was finished. The other two books went very similarly.

Happy reading! And if you have book suggestions for me, please fire away!!