A Dead Cat & Vomit: A story about friendship 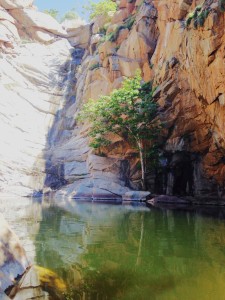 I convinced her to do the hike with me.

It’s called the Devil’s Punch Bowl.  Some of the reviews and bloggers were surprisingly dramatic about how hard of a hike it is and how much water you need to bring with you. (One blogger suggested something like 5 gallons per person. Which I still stand by the fact that that’s ridiculous.)

Reading a bit further on the matter, though, I found plenty of people who had said the hike itself is easy-moderate, it’s just hot and unshaded. Perfect, I thought. Work on my San Diego tan while we hike. Win win.

I asked Lizz if she was down for it, and she expressed concerns about having heard similarly scary reports of how hard it was. But I told her what I’ve just told you and she agreed to try it.

You hike three miles downhill in desert areas outside of San Diego, get to the Devil’s Punchbowl, hangout in the shade and/or water, then you go three miles back uphill in the sun. In the summer it averages around 115 degrees. But in March, when we were going, it was only 85 or 90. Totally doable.

We laughed and made jokes about the huge signs at the trailhead that say in big, capital block letters: “CAUTION. HEAT STROKE KILLS!”

“Hey Lizz, I don’t know if you’re heard, but you should really be cautious. There’s this thing called heat stroke, and it’ll kill ya dead.” We have a very dry, sarcastic humor with one another. For some reason we find it hilarious to just repeat obvious things in dumb voices. At least we entertain each other.

We hiked down with ease, though Lizz was starting to get really hot. Which probably should’ve been a tip-off. We were trying to conserve our water, though, so she drank little on the way down. When we got to the water, we stayed for a good 30 or 40 minutes, just trying to get her back to feeling OK. We still made jokes about how she was dying from heat stroke. But of course, she didn’t have heat stroke, she was just hot from hiking in the hot sun. She was fine. It did take her a long time to feel like she got her temp back down though.

When she finally did, we began the hike back up. About 2/3 of the way she was really struggling and started to talk about feeling light headed, nauseas and having a throbbing headache. Having worked at summer camps for many years, I know that means dehydrated, so we made steady slow effort up the trail and I kept having her drink more. More. More.

Here, drink my second water bottle. Here drink the rest of my last water bottle. With no cell service I was starting to get concerned, but near the end she said she was feeling a little better, so I went on ahead to get to the trail head and get myself some water, and bring some back for her if she had to stop.

But I didn’t have to go back for her, she was close enough behind me. She got to the trailhead, drank an entire liter of water, and then went and laid in the shade until she cooled off.

Sorry I almost killed you with heat stroke I apologized, still snarky.

She cooled down, we got in the car and headed for our next item for the day. On the drive I got cell service back and received a text message my mom had sent earlier that morning: “Hi Jo. Give me a call when you have a chance.”

As I was driving and Lizz was all heat-strokey, I decided I would call her once we arrived somewhere. I had a feeling in my gut that she was going to tell me my childhood cat had died. He was old, I knew he’d been potentially nearing the end for a while now, but if it was that, I didn’t want to know just yet.

We got into the next town and were almost to our destination when Lizz said, Pull over. Pull over right now I’m gonna throw up.

I pulled into a parking lot and she couldn’t get the door quite all the way open before she puked in the most projectile way of “projectile vomit” I’ve ever seen. Some of it hit part of the door, splashing back on her, and the rest drenched the hot asphalt.

All of the water I’d made her drink shot out like a water cannon. It was really quite impressive if it weren’t so sad.

After she seemed to have finished, she sat up, I handed her a napkin, she wiped her mouth and the door, and said I think I just need to sit here for a bit.

I decided I might as well call my mom and face the sad news if thats what it was while I waited.

Hi Jo, she started. It’s about your cat.

My tear ducts got ready.

Is he dead? I asked.

He went missing yesterday, and Dad went out to look for him today because we hadn’t seen him, and I’m sorry Jo but he found him in the pool. He drowned.

I cut her off. I felt the grief assaulting me. Ok, I’m sorry. I have to go. Bye.

I hit the “end call” button with a messy punch of my thumb before my hand just dropped the phone and I cried ugly, loud sobs while strangling the steering wheel. And then I wailed. The sounds guttural. Moans of distraught youth. Cries of old, old life officially gone.

Because he hadn’t died of old age he had drowned.

Because he’s the only pet* that’s ever been mine.

Because we only got him because me and my now dead older sister begged for him on our knees on the sidewalk outside of the froze yogurt place when we saw the lady with the box of free kittens. And while Julie would typically be far too proud to do anything like that, she’d done it with me.

Because he was just like me — he was independent and feisty and wanted to be loved, but only on his terms. He didn’t want you to hold him all night, he just wanted to touch base and come and go as he pleased. Unless you didn’t want him near you, then he’d work his way into your lap and your heart.

Because he had been a constant when everything else in life seemed to change. Not just once, but twice.

Because it was still with a child’s heart that I loved him.

After my loud cries and then silent sobs subsided, Lizz projected more vomit out the door while I blew my nose and wiped my eyes. She wiped her mouth again and we looked at each other.

I’m really sorry about your cat, she said.

I’m really sorry I made you hike and throw up, I said.

And we laughed again.

That’s officially the ugliest crying session of mine that anyone has ever witnessed. And again I reiterate that I’ve never seen such quintessential “projectile vomit” ever before in real life.

But we didn’t judge each other. We laughed at ourselves. And we were there. In the ugliest parts of life, that’s the most I could ever ask for in a friend, I think. No judgement, some laughter, and just being there. That’s the majority of what true friendship is. Not grand gestures and bff bracelets, but being someone who can sit in the ugliness of life and call it what it is.
Also, be cautious, heat stroke kills. 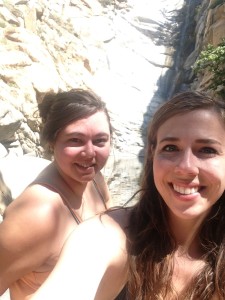 *I had a desert tortoise when I was young that my dad had found as a kid, and his mom had kept after he was grown, and she had given the tortoise to me when I was a kid, but then Pickles ran away one day. So one, Pickles was not just mine. And two, she ran away. And three, she was a tortoise, and it’s hard to connect with a tortoise. Just saying.