A Cold Drink – An honest look in the mirror of life. 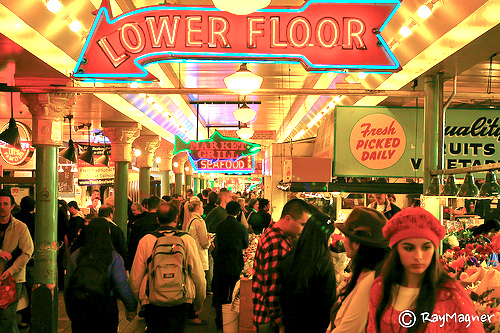 I met a man in Seattle recently. His name was Sean.

He was in Pike’s Place market, his worn backpack and layers the only things suggesting he was without a place to stay. I may have taken him for a wary tourist if he had not been asking loudly, in the general direction of the crowds passing by, “Can anyone spare enough money for a cold drink?”

I passed right by him, and when I looked up to meet his face, he was looking elsewhere. My eyes didn’t linger, didn’t spend any extra energy trying to meet his gaze. I passed on, and his tone got louder, his voice hoarse and raspy. “Can anyone spare some change? Please! Does anyone have enough money for a cold drink?”

All the while I could hear him. He was shouting now. Not an angry shout, but a sad, desperate shout. By the time I got back to him, his dry voice was shaking and begging the crowds that just kept passing by.

Regardless of my issues with the church, my wounds and my past, my distrust of people, and my serious questions about the Bible, I still would call myself a Christian. A God lover. And there is one thing I don’t have questions about from the Bible and the character of God. He says clearly, “I will say to you, you saw me naked and you clothed me, when I was thirsty you gave me a drink…as you have done to the least of these, you have done to me.”

And I know I’m undoing any karma or glory or whatever by telling you this, so believe me, I know it — it’s not to brag, and I’m fine with not getting anything from this. That’s not why I did it.

I did it because I had those words pop into my head, and I had this vision of this thirsty man, yelling with his parched voice, and no one, myself included taking the time to even acknowledge his humanity. Even if they didn’t give him anything, he was literally yelling for help and everyone was walking by ignoring him. He was thirsty, a basic human need that hits very, very close to my heart, and I hadn’t paused as I had walked by.

I’m telling you this because I’m ashamed of it. I’m pained that my first response was to ignore that tug in my chest, that churn of my gut, and to keep walking. To keep ignoring the yells for help right in front of me.

How will I ever pay attention to the yells for help that I can’t hear around the world — the “Please, I need something to drink” pleas around the world — if I blatantly and heartlessly walk past the one shouting in my ear at the Pike’s Place market in Seattle?

As I was in front of the artisan’s table several shops down and I could still hear his soft, but urgent yelling, desperation in his voice, I had a serious moment with myself where I said “What the F— do you think you are doing??”

I’ve had moments like this before. Where I feel the urge to help, the nudge to engage, and I walk by. And I still feel it as I walk farther and farther and I’m too embarrassed to turn back, so I continue to ignore it. I still think about several of those moments years later.

This time, I was more disgusted with myself than ashamed, and I had to fix it.

“Hi,” I said, as he stopped his pleading to the crowd when he saw me approaching.  “I don’t hand out money,” I said apologetically.

“Sure. So, let’s go somewhere, and I’ll get you whatever you want,” I finished my first thought.

I again reiterated he could have anything he wanted. He literally got a $2.50 fountain drink. He filled his glass with cold water first and downed it, and then filled the second with ice and soda.

We did not have any significant interaction as we got his drink. I learned a little bit of his story. He a little bit of mine. We’re both from near Sacramento, and we’re both on journeys that we didn’t want to have to begin. We’ve both missed what we thought we’d find, and are trying to figure out what’s next.

My life right now is asking people to talk to me, to share their stories. It is my life to listen and then write and validate.  But I passed by a man literally crying out to be heard and helped.

It cost me $2.50 to fix someone’s thirst. But more importantly, it cost me nothing to look him in the eye, speak to him, and validate his existence.

When I think about it, I’m still extremely frustrated with my reactions. I still have a long, long way to go on this journey. And if I get thirsty along the way, I hope there will be people quicker to hear than I was.

Sometimes the people or circumstances around us are mirrors, and this moment was a mirror in which I saw that what’s in there is still kind of ugly. That I still have a good deal more work to do to be the person I want to be in the world. They’re not fun moments — those mirrors — but they’re necessary.