Last Sunday marked 25 years since the Berlin wall fell. But in reality, it didn’t just fall. That’s passive. It was torn down. With bare hands. It was pulled to the ground. And for the first time since before Hitlers rule, Germany was again a united nation. Nov. 9, 1989.

I remember hearing someone mentioning this when I was 14 and I wrote it down as being a good speech topic for graduation. (I had my eye on being one of the top students of my class even then so that I could give a speech. And I’m a nerd who writes ideas like that down 3 years before I need it.)

When I was 17 I was preparing to end the school year and I had to write the speech I had worked so hard to have the honor to give. I was wrestling with becoming aware of all the social injustices in the world — things like lack of clean water, lack of food and sanitation, AIDS, the ways the world had managed to take the African continent, the richest continent in resources, and keep it the poorest continent overall. I was struggling with these things, paired with the overwhelming joy and fear about traveling to Malawi, Africa a mere 9 hours after graduation to see these injustices for myself for the first time. And I remembered I had written something down about a speech idea years before. I found the paper, and it simply said  — “The Berlin Wall fell in 1989, same year we were born.”

And so at 17 I gave a graduation speech about that being symbolic about out potential to tear down falls. To have a world that is free. To be a generation that can be the ones who use our bare hands to tear down the boundaries that keep people at bay, that keep them afraid, that keep them in the dark or in poverty or in oppression.

But it wasn’t until this past summer that I actually got to visit the wall (SEE PHOTOS BELOW). I had just turned 25. The wall had been torn down for almost 25 years. And it was more emotional of an experience for me than I would have thought. It’s been a lot of years since that graduation speech. And I’ve learned much more about the history of the world, and the wall, since then. But I’ve also learned more about pain. About oppression. About being trapped in.

And it surprised me to see that there are still several significant chunks of the wall left standing. I thought all had been torn down except at checkpoint charlie, but they haven’t. And even where the wall does not remain, you can trace it’s course from bricks left in the pavement that go wherever it did. They serve as a marker, as a memory of both the pain, and the triumph of tearing it down.

I respect that about Berlin. I think most cities would like to just bury it. To give it no air time. But united Berlin, urban Berlin, busting metropolis Berlin still bears the scars of a torn Berlin, bears the scars of so many years. And I think that’s honest. Because sometimes, I feel like I wish I could bury my scars under pavements, but I want to make the intentional decision to let the brick path stand — not as an obstacle, just as a reminder that says:  “We bore life for a long time with the wall, but we have torn it down now. Both are parts of our story.”

I’m celebrating with Germany this week.

Below is an excerpt from an article on MSN.com yesterday:

With her customary decorum, Chancellor Angela Merkel led her country in celebrations flavored with the only-in–Germany mix of triumph and tragedy.

In a 20-minute speech at a new memorial to the tragedies wrought by the wall, Ms. Merkel noted the special meaning of Nov. 9 in German history. It was on that day, in 1918, that Kaiser Wilhelm II abdicated, “after four terrible years” of World War I. In 1923, it was the date of Hitler’s failed march on the Munich Festhalle. In 1938, she said, it was when the Nazis set fire to synagogues, plundered Jewish homes and businesses and detained and killed thousands of Jews — “the start of the killing of millions” in the catastrophe of the Holocaust.

Only in 1989, after Europeans across the Soviet bloc were rising up against Communism, did Nov. 9 become a date of joy with the wall falling. Now, Ms. Merkel and many other speakers this weekend noted, it is up to Germans to nurture the memory, preserve democracy and intervene to prevent injustice.

*Disclaimer, I’m not well-trained nor well-skilled in poetry. I don’t know how to stick to rhyme or meter. So maybe these aren’t really poems, but I’m calling it one. I have it as one of my goals for my 26 before I turn 26 list to write 12 more poems, and I thought this was a fitting topic.

The Wall by Joanna O’Hanlon

That wall so high, so thick so sick

it makes my wiley gut churn.

Our city is two, is blue is doom

but one side is red as our blood runs.

runs round the SS HQ —

where’s the SS for you?

The east and west, forever at odds,

one side captive, another in awe.

let’s pull the wall down.

Time for a united town.

Our children will know a different world,

They will feel the rough concrete,

and they will feel no fear.

A relic to remember,

a symbol to our pain,

they won’t hear bullets as they draw near.

The wall will not be mended,

the long cold will be ended.

What was once our scorn

will be a tourist place, graffiti adorned.

And our hearts will slow,

our breathing will steady,

our Berlin is here, 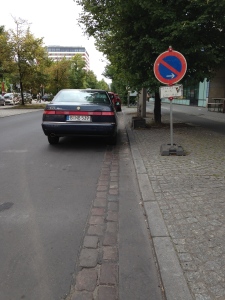 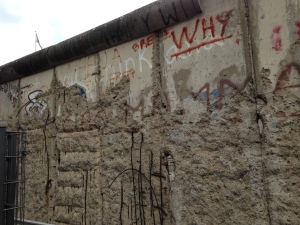 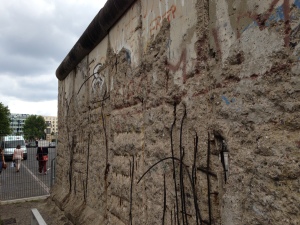 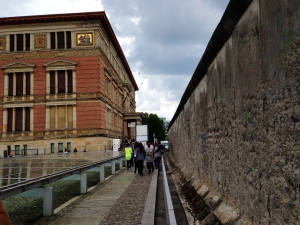 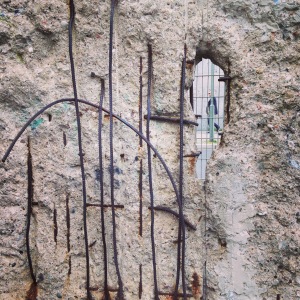